Apache
Back to index

In addition to being a "basic" web server, and providing static and dynamic content to end-users, Apache httpd (as well as most other web servers) can also act as a reverse proxy server, also-known-as a "gateway" server.

In such scenarios, httpd itself does not generate or host the data, but rather the content is obtained by one or several backend servers, which normally have no direct connection to the external network. As httpd receives a request from a client, the request itself is proxied to one of these backend servers, which then handles the request, generates the content and then sends this content back to httpd, which then generates the actual HTTP response back to the client.

There are numerous reasons for such an implementation, but generally the typical rationales are due to security, high-availability, load-balancing and centralized authentication/authorization. It is critical in these implementations that the layout, design and architecture of the backend infrastructure (those servers which actually handle the requests) are insulated and protected from the outside; as far as the client is concerned, the reverse proxy server is the sole source of all content.

A typical implementation is below: 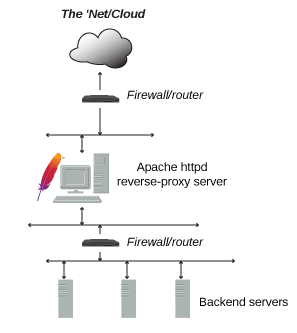 The ProxyPass directive specifies the mapping of incoming requests to the backend server (or a cluster of servers known as a Balancer group). The simplest example proxies all requests ("/") to a single backend:

To ensure that and Location: headers generated from the backend are modified to point to the reverse proxy, instead of back to itself, the ProxyPassReverse directive is most often required:

Only specific URIs can be proxied, as shown in this example:

In the above, any requests which start with the /images path with be proxied to the specified backend, otherwise it will be handled locally.

As useful as the above is, it still has the deficiencies that should the (single) backend node go down, or become heavily loaded, that proxying those requests provides no real advantage. What is needed is the ability to define a set or group of backend servers which can handle such requests and for the reverse proxy to load balance and failover among them. This group is sometimes called a cluster but Apache httpd's term is a balancer. One defines a balancer by leveraging the <Proxy> and BalancerMember directives as shown:

The balancer:// scheme is what tells httpd that we are creating a balancer set, with the name myset. It includes 2 backend servers, which httpd calls BalancerMembers. In this case, any requests for /images will be proxied to one of the 2 backends. The ProxySet directive specifies that the myset Balancer use a load balancing algorithm that balances based on I/O bytes.

BalancerMembers are also sometimes referred to as workers.

You can adjust numerous configuration details of the balancers and the workers via the various parameters defined in ProxyPass. For example, assuming we would want http://www3.example.com:8080 to handle 3x the traffic with a timeout of 1 second, we would adjust the configuration as follows:

You can also fine-tune various failover scenarios, detailing which workers and even which balancers should be accessed in such cases. For example, the below setup implements three failover cases:

Thus, it is possible to have one or more hot spares and hot standbys for each load balancer set.

One of the most unique and useful features of Apache httpd's reverse proxy is the embedded balancer-manager application. Similar to mod_status, balancer-manager displays the current working configuration and status of the enabled balancers and workers currently in use. However, not only does it display these parameters, it also allows for dynamic, runtime, on-the-fly reconfiguration of almost all of them, including adding new BalancerMembers (workers) to an existing balancer. To enable these capability, the following needs to be added to your configuration:

Do not enable the balancer-manager until you have secured your server. In particular, ensure that access to the URL is tightly restricted.

When the reverse proxy server is accessed at that url (eg: http://rproxy.example.com/balancer-manager/, you will see a page similar to the below:

This form allows the devops admin to adjust various parameters, take workers offline, change load balancing methods and add new works. For example, clicking on the balancer itself, you will get the following page: 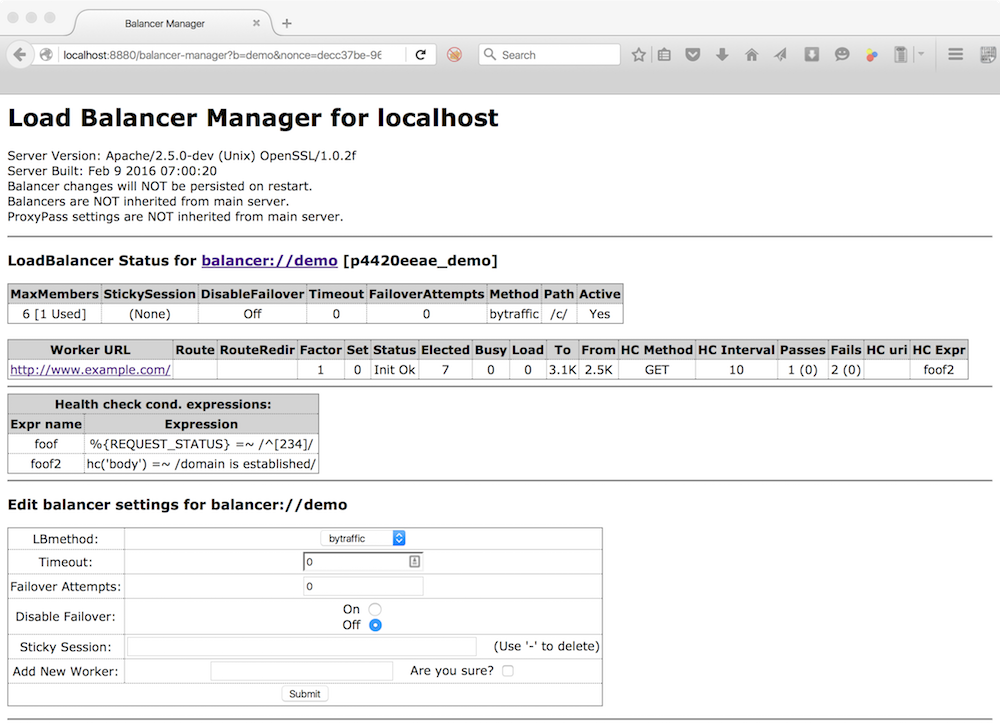 Whereas clicking on a worker, displays this page: 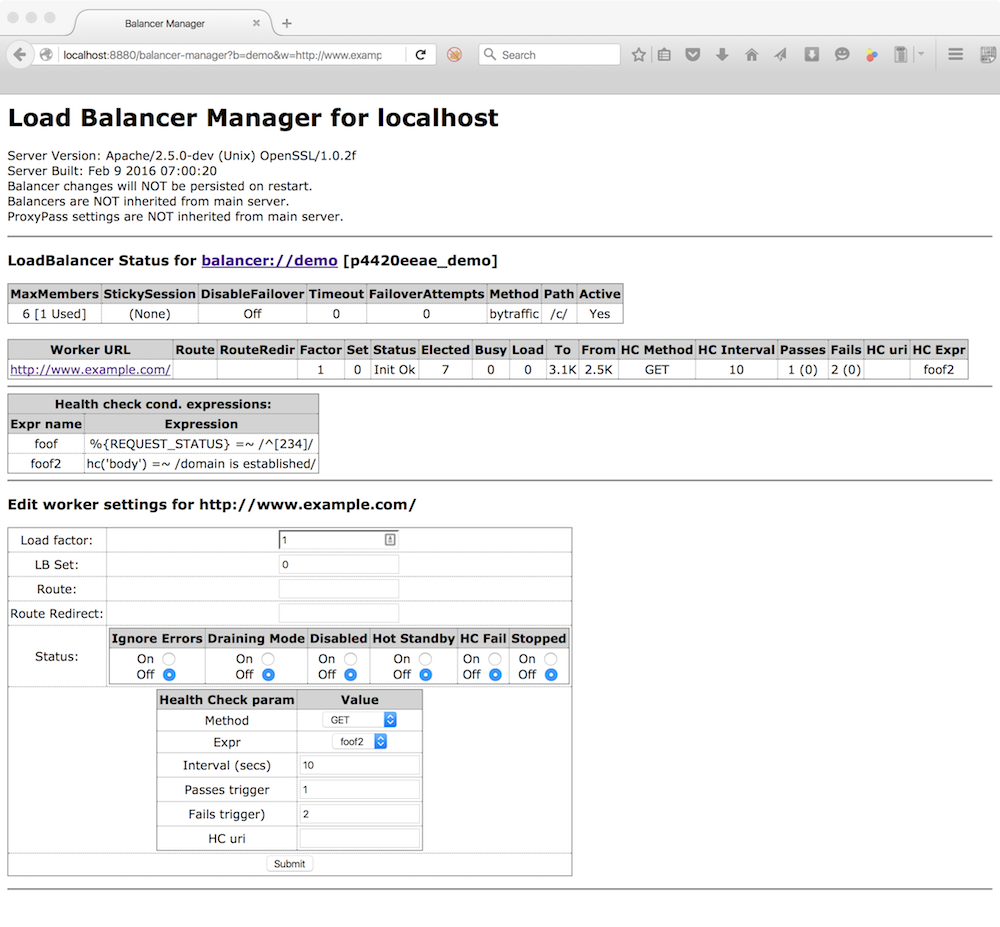 To have these changes persist restarts of the reverse proxy, ensure that BalancerPersist is enabled.

Before httpd proxies a request to a worker, it can "test" if that worker is available via setting the ping parameter for that worker using ProxyPass. Oftentimes it is more useful to check the health of the workers out of band, in a dynamic fashion. This is achieved in Apache httpd by the mod_proxy_hcheck module.

In the balancer-manager the current state, or status, of a worker is displayed and can be set/reset. The meanings of these statuses are as follows: