This section discusses how to work with bidirectional text with classes in the java.awt and java.awt.font packages. These classes let you draw styled text in any language or script supported by The Unicode Standard: a global character coding system for handling diverse modern, classical, and historical languages. When drawing text, the direction the text is read must be taken into account so that all words in the string display correctly. These classes maintain the direction of the text and correctly draws it no matter if the string runs left-to-right, right-to-left, or both (bidirectional). Bidirectional text presents interesting problems for correctly positioning carets, accurately locating selections, and correctly displaying multiple lines. Also bidirectional and right-to-left text present similar problems for moving the caret in the correct direction in response to right and left arrow key presses.

The following topics are covered:

If you plan to work with Swing components see Working with Bidirectional Text with the JTextComponent Class and Using Text Components for more information.

A writing system' visual order must be maintained in bidirectional text even when languages are mixed together. This is illustrated in the following figure, which displays an Arabic phrase embedded in an English sentence.

Even though they are part of an English sentence, the Arabic words are displayed in the Arabic script order, right-to-left. Because the italicized Arabic word is logically after the Arabic in plain text, it is visually to the left of the plain text.

Graphics are often embedded in the flow of text. These inline graphics behave like glyphs in terms of how they affect the text flow and line wrapping. Such inline graphics need to be positioned using the same bidirectional layout algorithm so that they appear in the proper location in the flow of characters.

Java SE uses the Unicode Bidirectional Algorithm , which is an algorithm that is used to order glyphs within a line, thereby determining the directionality of bidirectional texts. In most cases, you do not need to include any additional information in order for this algorithm to obtain the correct display ordering.

To allow the user to edit bidirectional text, you must be able to do the following:

In editable text, a caret is used to graphically represent the current insertion point, the position in the text where new characters will be inserted. Typically, a caret is shown as a blinking vertical bar between two glyphs. New characters are inserted and displayed at the caret's location.

Calculating the caret position can be complicated, particularly for bidirectional text. Insertion offsets on directional boundaries have two possible caret positions because the two glyphs that correspond to the character offset are not displayed adjacent to one another. This is illustrated in the following figure. In this figure, the carets are shown as square brackets to indicate the glyph to which the caret corresponds.

When you're working with bidirectional text, you can't simply add the widths of the glyphs before a character offset to calculate the caret position. If you did, the caret would be drawn in the wrong place, as shown in the following figure:

For the caret to be properly positioned, the widths of the glyphs to the left of the offset need to be added and the current context taken into account. Unless the context is taken into account, the glyph metrics will not necessarily match the display. (The context can affect which glyphs are used.)

All text editors allow the user to move the caret with the arrow keys. Users expect the caret to move in the direction of the pressed arrow key. In left-to-right text, moving the insertion offset is simple: the right arrow key increases the insertion offset by one and the left arrow key decreases it by one. In bidirectional text or in text with ligatures, this behavior would cause the caret to jump across glyphs at direction boundaries and move in the reverse direction within different directional runs.

The TextLayout class provides methods ( getNextRightHit and getNextLeftHit ) that enable you to easily move the caret smoothly through bidirectional text.

When you're working with bidirectional text, a single visual location in the display can correspond to two different offsets in the source text, as shown in the following figure:

Because a single visual location can correspond to two different offsets, hit testing bidirectional text isn't just a matter of measuring glyph widths until the glyph at the correct location is found and then mapping that position back to a character offset. Detecting the side that the hit was on helps distinguish between the two alternatives.

You can perform hit testing using TextLayout.hitTestChar . Hit information is encapsulated in a TextHitInfo object and includes information about the side that the hit was on.

A selected range of characters is represented graphically by a highlight region, an area in which glyphs are displayed with inverse video or against a different background color.

This results in two strategies for highlighting selections in bidirectional text:

Logical highlighting is simpler to implement, since the selected characters are always contiguous in the text. 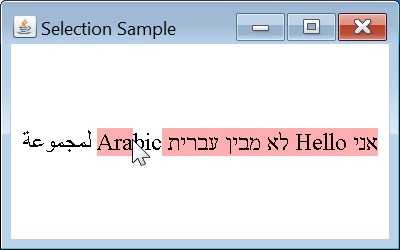 Depending on which Java APIs you use, you can have as little or as much control over text layout as you need:

Generally, you do not need to perform text layout operations yourself. For most applications, JTextComponent is the best solution for displaying static and editable text. However, JTextComponent does not support the display of dual carets or discontiguous selections in bidirectional text. If your application requires these features, or you prefer to implement your own text editing routines, you can use the Java 2D text layout APIs.

The TextLayout class supports text that contains multiple styles and characters from different writing systems, including Arabic and Hebrew. (Arabic and Hebrew are particularly difficult to display because you must reshape and reorder the text to achieve an acceptable representation.)

TextLayout simplifies the process of displaying and measuring text even if you are working with English-only text. By using TextLayout , you can achieve high-quality typography with no extra effort.

TextLayout is designed so that there is no significant performance impact when it is used to display simple, unidirectional text. There is some additional processing overhead when TextLayout is used to display Arabic or Hebrew text. However, it's typically on the order of microseconds per character and is dominated by the execution of normal drawing code.

The TextLayout class manages the positioning and ordering of glyphs for you. You can use TextLayout to do the following:

Laying Out Text with the TextLayout Class

TextLayout automatically lays out text, including bidirectional text, with the correct shaping and ordering. To correctly shape and order the glyphs representing a line of text, TextLayout must know the full context of the text:

The base direction of the text is normally set by an attribute (style) on the text. If that attribute is missing, TextLayout follows the Unicode bidirectional algorithm and derives the base direction from the initial characters in the paragraph.

TextLayout provides default caret Shapes and automatically supports dual carets. For italic and oblique glyphs, TextLayout produces angled carets, as shown in the following figure. These caret positions are also used as the boundaries between glyphs for highlighting and hit testing, which helps produce a consistent user experience.

Given an insertion offset, the getCaretShapes method returns a two-element array of Shape objects: element 0 contains the strong caret and element 1 contains the weak caret, if one exists. To display dual carets, you simply draw both caret Shape objects; the carets will be automatically be rendered in the correct positions.

If you want to use custom carets, you can retrieve the position and angle of the carets from the TextLayout and draw them yourself.

A click on the o on the side of the o towards the Hebrew text records that the end user clicked after the o, which is part of the English text. This positions the weak (black) caret next to the o and the strong caret (red) in front of the H: 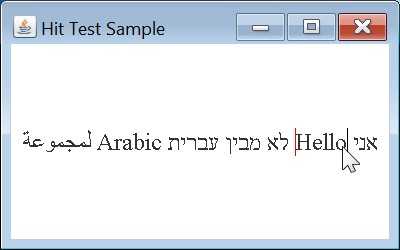 A click on the space to the right of the o records that the end user clicked the space, which is part of the Hebrew text. This positions the strong (red) caret next to the o and the weak caret (black) in front of the H: 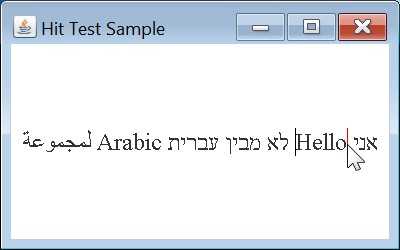 Moving the Caret with the TextLayout Class

The following excerpt from the sample ArrowKeySample.java demonstrates how to determine the resulting insertion offset when a user presses the left or right arrow key:

Hit Testing with the TextLayout Class

The TextLayout class provides a simple mechanism for hit testing text. The hitTextChar method takes x and y coordinates from the mouse as arguments and returns a TextHitInfo object. The TextHitInfo contains the insertion offset for the specified position and the side that the hit was on. The insertion offset is the offset closest to the hit: if the hit is past the end of the line, the offset at the end of the line is returned.

The following excerpt from HitTestSample.java retrieves the offset from a mouse click:

Highlighting Selections with the TextLayout Class

The following excerpt from SelectionSample.java demonstrates one way to display highlighted text:

The method SelectionMouseListener.mousePressed specifies the variable anchorEnd, which is the position in the text where the mouse was clicked. The method SelectionMouseMotionListener.mouseDragged specifies the variable activeEnd, which is the position in the text to where the mouse was dragged. The paint method retrieves a Shape object that represents the selected text (the text between the positions anchorEnd and activeEnd). The paint method then fills the Shape object with the highlight color.