In the preceding lessons, you have seen inheritance mentioned several times. In the Java language, classes can be derived from other classes, thereby inheriting fields and methods from those classes.

The idea of inheritance is simple but powerful: When you want to create a new class and there is already a class that includes some of the code that you want, you can derive your new class from the existing class. In doing this, you can reuse the fields and methods of the existing class without having to write (and debug!) them yourself.

A subclass inherits all the members (fields, methods, and nested classes) from its superclass. Constructors are not members, so they are not inherited by subclasses, but the constructor of the superclass can be invoked from the subclass.

The Object class, defined in the java.lang package, defines and implements behavior common to all classes—including the ones that you write. In the Java platform, many classes derive directly from Object , other classes derive from some of those classes, and so on, forming a hierarchy of classes. 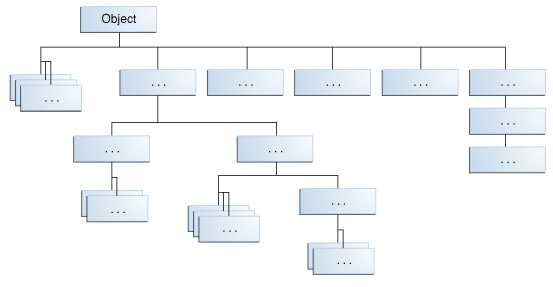 All Classes in the Java Platform are Descendants of Object

An Example of Inheritance

Here is the sample code for a possible implementation of a Bicycle class that was presented in the Classes and Objects lesson:

A class declaration for a MountainBike class that is a subclass of Bicycle might look like this:

MountainBike inherits all the fields and methods of Bicycle and adds the field seatHeight and a method to set it. Except for the constructor, it is as if you had written a new MountainBike class entirely from scratch, with four fields and five methods. However, you didn't have to do all the work. This would be especially valuable if the methods in the Bicycle class were complex and had taken substantial time to debug.

What You Can Do in a Subclass

The following sections in this lesson will expand on these topics.

Private Members in a Superclass

A subclass does not inherit the private members of its parent class. However, if the superclass has public or protected methods for accessing its private fields, these can also be used by the subclass.

We have seen that an object is of the data type of the class from which it was instantiated. For example, if we write

then myBike is of type MountainBike .

Casting shows the use of an object of one type in place of another type, among the objects permitted by inheritance and implementations. For example, if we write

then obj is both an Object and a MountainBike (until such time as obj is assigned another object that is not a MountainBike ). This is called implicit casting.

If, on the other hand, we write

Note: You can make a logical test as to the type of a particular object using the instanceof operator. This can save you from a runtime error owing to an improper cast. For example:

Here the instanceof operator verifies that obj refers to a MountainBike so that we can make the cast with knowledge that there will be no runtime exception thrown.