How to Use Combo Boxes

A JComboBox , which lets the user choose one of several choices, can have two very different forms. The default form is the uneditable combo box, which features a button and a drop-down list of values. The second form, called the editable combo box, features a text field with a small button abutting it. The user can type a value in the text field or click the button to display a drop-down list. Here's what the two forms of combo boxes look like in the Java look and feel:

Combo boxes require little screen space, and their editable (text field) form is useful for letting the user quickly choose a value without limiting the user to the displayed values. Other components that can display one-of-many choices are groups of radio buttons and lists. Groups of radio buttons are generally the easiest for users to understand, but combo boxes can be more appropriate when space is limited or more than a few choices are available. Lists are not terribly attractive, but they're more appropriate than combo boxes when the number of items is large (say, over 20) or when selecting multiple items might be valid.

Because editable and uneditable combo boxes are so different, this section treats them separately. This section covers these topics: 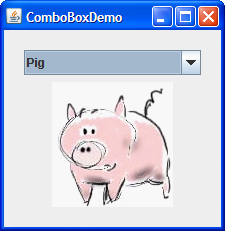 The following code, taken from ComboBoxDemo.java , creates an uneditable combo box and sets it up:

This combo box contains an array of strings, but you could just as easily use icons instead. To put anything else into a combo box or to customize how the items in a combo box look, you need to write a custom renderer. An editable combo box would also need a custom editor. Refer to Providing a Custom Renderer for information and an example.

The preceding code registers an action listener on the combo box. To see the action listener implementation and learn about other types of listeners supported by combo box, refer to Handling Events on a Combo Box.

No matter which constructor you use, a combo box uses a combo box model to contain and manage the items in its menu. When you initialize a combo box with an array or a vector, the combo box creates a default model object for you. As with other Swing components, you can customize a combo box in part by implementing a custom model — an object that implements the ComboBoxModel interface.

Be careful when implementing a custom model for a combo box. The JComboBox methods that change the items in the combo box's menu, such as insertItemAt, work only if the data model implements the MutableComboBoxModel interface (a subinterface of ComboBoxModel). Refer to the API tables to see which methods are affected.

Handling Events on a Combo Box

Here's the code from ComboBoxDemo.java that registers and implements an action listener on the combo box:

Combo boxes also generate item events, which are fired when any of the items' selection state changes. Only one item at a time can be selected in a combo box, so when the user makes a new selection the previously selected item becomes unselected. Thus two item events are fired each time the user selects a different item from the menu. If the user chooses the same item, no item events are fired. Use addItemListener to register an item listener on a combo box. How to Write an Item Listener gives general information about implementing item listeners.

Here's a picture of a demo application that uses an editable combo box to enter a pattern with which to format dates. 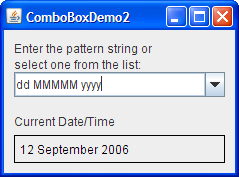 The following code, taken from ComboBoxDemo2.java , creates and sets up the combo box:

This code is very similar to the previous example, but warrants a few words of explanation. The bold line of code explicitly turns on editing to allow the user to type values in. This is necessary because, by default, a combo box is not editable. This particular example allows editing on the combo box because its menu does not provide all possible date formatting patterns, just shortcuts to frequently used patterns.

See Internationalization to learn more about formatting dates and other types of data.

The default renderer knows how to render strings and icons. If you put other objects in a combo box, the default renderer calls the toString method to provide a string to display. You can customize the way a combo box renders itself and its items by implementing your own ListCellRenderer.

Here's a picture of an application that uses a combo box with a custom renderer: 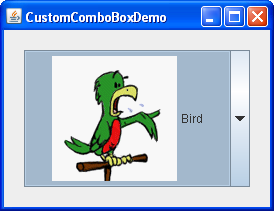 Click the Launch button to run the CustomComboBox Demo using Java™ Web Start (download JDK 7 or later ). Alternatively, to compile and run the example yourself, consult the example index.

The full source code for this example is in CustomComboBoxDemo.java . To get the image files it requires, consult the example index.

The following statements from the example create an instance of ComboBoxRenderer (a custom class) and set up the instance as the combo box's renderer:

These arguments are passed to getListCellRendererComponent:

The following tables list the commonly used JComboBox constructors and methods. Other methods you are most likely to invoke on a JComboBox object are those it inherits from its superclasses, such as setPreferredSize. See The JComponent API for tables of commonly used inherited methods.

The API for using combo boxes falls into two categories:

Examples that Use Combo Boxes

This table shows the examples that use JComboBox and where those examples are described.