How to Use Editor Panes and Text Panes

Two Swing classes support styled text: JEditorPane and its subclass JTextPane . The JEditorPane class is the foundation for Swing's styled text components and provides a mechanism through which you can add support for custom text formats. If you want unstyled text, use a text area instead. 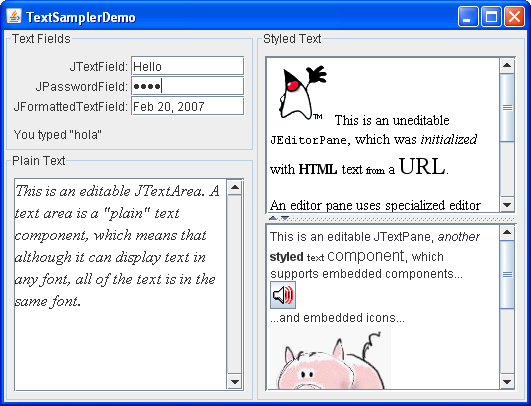 The TextSamplerDemo example barely begins to demonstrate the capabilities of editor panes and text panes. However, the top right editor pane illustrates a handy, easy-to-use feature: it displays uneditable help information loaded from a URL. The text pane at the lower right demonstrates that you can easily embed images and even components directly into text panes.

If you need a fully-fledged help system, take a look at the javahelp project.

The Swing text API is powerful and immense, and we could devote an entire book just to using editor panes and text panes. This section introduces their capabilities, offers hints on which one you might want to use, and points to other sources of information.

Using an Editor Pane to Display Text From a URL

One task that you can accomplish without knowing anything about the Swing text system is displaying text from a URL. Here is the code from TextSamplerDemo.java that creates an uneditable editor pane that displays text formatted with HTML tags.

The code uses the default constructor to create the editor pane, then calls setEditable(false) so the user cannot edit the text. Next, the code creates the URL object, and calls the setPage method with it.

The setPage method opens the resource pointed to by the URL and figures out the format of the text (which is HTML in the example). If the text format is known, the editor pane initializes itself with the text found at the URL. A standard editor pane can understand plain text, HTML, and RTF. Note that the page might be loaded asynchronously, which keeps the GUI responsive but means that you should not count on the data being completely loaded after the call to setPage returns.

An Example of Using a Text Pane

Here is the code from the TextSamplerDemo example that creates and initializes a text pane.

Briefly, this code hard-codes the initial text into an array and creates and hard-codes several styles — objects that represent different paragraph and character formats — into another array. Next, the code loops over the arrays, inserts the text into the text pane, and specifies the style to use for the inserted text.

Although this is an interesting example that concisely demonstrates several features of JTextPane, "real-world" programs aren't likely to initialize a text pane this way. Instead, a program would use an editor pane to save a document which would then be used to initialize the text pane.

Examples That Use Text Panes and Editor Panes

To begin using text, you might want to run these programs and examine their code to find something similar to what you want to do.