How to Use File Choosers

If you intend to distribute your program as a sandbox Java Web Start application, then instead of using the JFileChooser API you should use the file services provided by the JNLP API. These services — FileOpenService and FileSaveService — not only provide support for choosing files in a restricted environment, but also take care of actually opening and saving them. An example of using these services is in JWSFileChooserDemo. Documentation for using the JNLP API can be found in the Java Web Start lesson.

When working with the JWSFileChooserDemo example, be careful not to lose files that you need. Whenever you click the save button and select an existing file, this demo brings up the File Exists dialog box with a request to replace the file. Accepting the request overwrites the file.

The rest of this section discusses how to use the JFileChooser API. A JFileChooser object only presents the GUI for choosing files. Your program is responsible for doing something with the chosen file, such as opening or saving it. Refer to Basic I/O for information on how to read and write files. 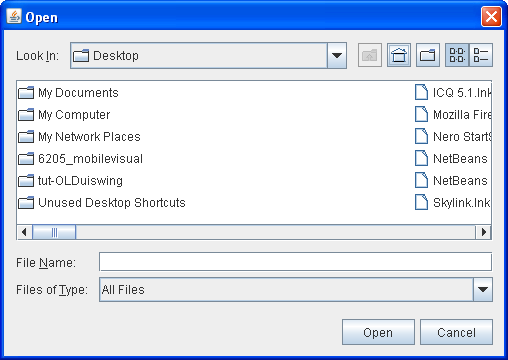 Here is a picture of an application called FileChooserDemo that brings up an open dialog and a save dialog. 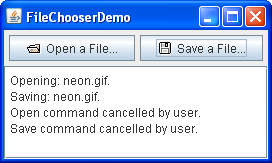 Bringing up a standard open dialog requires only two lines of code:

By default, a file chooser that has not been shown before displays all files in the user's home directory. You can specify the file chooser's initial directory by using one of JFileChooser's other constructors, or you can set the directory with the setCurrentDirectory method.

The call to showOpenDialog appears in the actionPerformed method of the Open a File button's action listener:

The showXxxDialog methods return an integer that indicates whether the user selected a file. Depending on how you use a file chooser, it is often sufficient to check whether the return value is APPROVE_OPTION and then not to change any other value. To get the chosen file (or directory, if you set up the file chooser to allow directory selections), call the getSelectedFile method on the file chooser. This method returns an instance of File .

The example obtains the name of the file and uses it in the log message. You can call other methods on the File object, such as getPath, isDirectory, or exists to obtain information about the file. You can also call other methods such as delete and rename to change the file in some way. Of course, you might also want to open or save the file by using one of the reader or writer classes provided by the Java platform. See Basic I/O for information about using readers and writers to read and write data to the file system.

The example program uses the same instance of the JFileChooser class to display a standard save dialog. This time the program calls showSaveDialog:

By using the same file chooser instance to display its open and save dialogs, the program reaps the following benefits:

Finally, the example program has commented-out lines of code that let you change the file selection mode. For example, the following line of code makes the file chooser able to select only directories, and not files:

Another possible selection mode is FILES_AND_DIRECTORIES. The default is FILES_ONLY. The following picture shows an open dialog with the file selection mode set to DIRECTORIES_ONLY. Note that, in the Java look and feel at least, only directories are visible — not files. 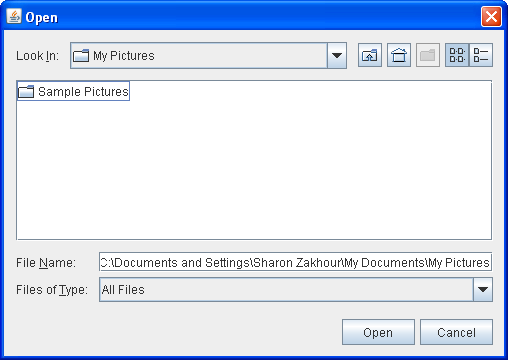 Let us look at FileChooserDemo2 example, a modified version of the previous demo program that uses more of the JFileChooser API. This example uses a file chooser that has been customized in several ways. Like the original example, the user invokes a file chooser with the push of a button. Here is a picture of the file chooser: 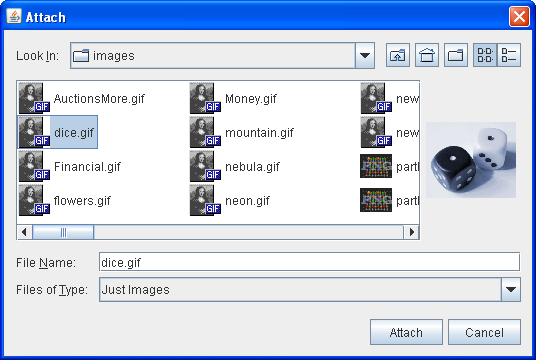 As the figure shows, this file chooser has been customized for a special task (Attach), provides a user-choosable file filter (Just Images), uses a special file view for image files, and has an accessory component that displays a thumbnail sketch of the currently selected image file.

The remainder of this section shows you the code that creates and customizes this file chooser. See the example index for links to all the files required by this example.

Using a File Chooser for a Custom Task

The class has another method, showDialog, for displaying a file chooser for a custom task in a dialog. In the Java look and feel, the only difference between this dialog and the other file chooser dialogs is the title on the dialog window and the label on the approve button. Here is the code from FileChooserDemo2 that brings up the file chooser dialog for the Attach task:

The first argument to the showDialog method is the parent component for the dialog. The second argument is a String object that provides both the title for the dialog window and the label for the approve button.

By default, a file chooser displays all of the files and directories that it detects, except for hidden files. A program can apply one or more file filters to a file chooser so that the chooser shows only some files. The file chooser calls the filter's accept method for each file to determine whether it should be displayed. A file filter accepts or rejects a file based on criteria such as file type, size, ownership, and so on. Filters affect the list of files displayed by the file chooser. The user can enter the name of any file even if it is not displayed.

JFileChooser supports three different kinds of filtering. The filters are checked in the order listed here. For example, an application-controlled filter sees only those files accepted by the built-in filtering.

Built-in filtering
Filtering is set up through specific method calls on a file chooser. Currently the only built-in filter available is for hidden files, such as those whose names begin with period (.) on UNIX systems. By default, hidden files are not shown. Call setFileHidingEnabled(false) to show hidden files.
Application-controlled filtering
The application determines which files are shown. Create a custom subclass of FileFilter , instantiate it, and use the instance as an argument to the setFileFilter method. The installed filter is displayed on the list of user-choosable filters. The file chooser shows only those files that the filter accepts.
User-choosable filtering
The file chooser GUI provides a list of filters that the user can choose from. When the user chooses a filter, the file chooser shows only those files accepted by that filter. FileChooserDemo2 adds a custom file filter to the list of user-choosable filters: By default, the list of user-choosable filters includes the Accept All filter, which enables the user to see all non-hidden files. This example uses the following code to disable the Accept All filter: Our custom file filter is implemented in ImageFilter.java and is a subclass of FileFilter. The ImageFilter class implements the getDescription method to return "Just Images" — a string to put in the list of user-choosable filters. ImageFilter also implements the accept method so that it accepts all directories and any file that has a .png, .jpg, .jpeg, .gif, .tif, or .tiff filename extension. By accepting all directories, this filter allows the user to navigate around the file system. If the bold lines were omitted from this method, the user would be limited to the directory with which the chooser was initialized.

In the Java look and feel, the chooser's list shows each file's name and displays a small icon that represents whether the file is a true file or a directory. You can customize this file view by creating a custom subclass of FileView and using an instance of the class as an argument to the setFileView method. The example uses an instance of a custom class, implemented in ImageFileView.java , as the file chooser's file view.

The ImageFileView class shows a different icon for each type of image accepted by the image filter described previously.

The ImageFileView class overrides the five abstract methods defined in the FileView as follows.

The example calls the setAccessory method to establish an instance of the ImagePreview class, implemented in ImagePreview.java , as the chooser's accessory component:

Any object that inherits from the JComponent class can be an accessory component. The component should have a preferred size that looks good in the file chooser.

Here is the example's implementation of the propertyChange method, which is the method called when a property change event is fired:

The API for using file choosers falls into these categories:

Examples That Use File Choosers

This table shows the examples that use file choosers and points to where those examples are described.