How to Use Internal Frames

You should consider carefully whether to base your program's GUI around frames or internal frames. Switching from internal frames to frames or vice versa is not necessarily a simple task. By experimenting with both frames and internal frames, you can get an idea of the tradeoffs involved in choosing one over the other.

Here is a picture of an application that has two internal frames (one of which is iconified) inside a regular frame: 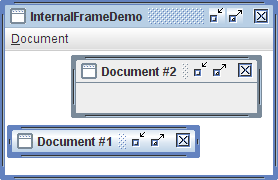 The following code, taken from InternalFrameDemo.java , creates the desktop and internal frames in the previous example.

Just as for a regular frame, you must invoke setVisible(true) or show() on an internal frame to display it. The internal frame does not appear until you explicitly make it visible.

Another feature is that internal frames are designed to work within desktop panes. The JInternalFrame API contains methods such as moveToFront that work only if the internal frame's container is a layered pane such as a JDesktopPane.

If you have built any programs using JFrame and the other Swing components, then you already know a lot about how to use internal frames. The following list summarizes the rules for using internal frames. For additional information, see How to Make Frames and The JComponent Class.

Use the JDesktopPane method setDragMode* to specify outline dragging. For example:

The following tables list the commonly used JInternalFrame constructors and methods, as well as a few methods that JDesktopPane provides. Besides the API listed in this section, JInternalFrame inherits useful API from its superclasses, JComponent, Component, and Container. See The JComponent Class for lists of methods from those classes.

The API for using internal frames falls into these categories:

Examples that Use Internal Frames