How to Use Layered Panes

A layered pane is a Swing container that provides a third dimension for positioning components: depth , also known as Z order . When adding a component to a layered pane, you specify its depth as an integer. The higher the number, closer the component is to the "top" position within the container. If components overlap, the "closer" components are drawn on top of components at a lower depth. The relationship between components at the same depth is determined by their positions within the depth.

The AWT Container has an API that allows you to manipulate component Z order . For more information, see the AWT Focus Specification.

Every Swing container that has a root pane — such as JFrame, JApplet, JDialog, or JInternalFrame — automatically has a layered pane. Most programs do not explicitly use the root pane's layered pane, so this section will not discuss it. You can find information about it in The Root Pane, which provides an overview, and The Layered Pane, which has further details. This section tells you how to create your own layered pane and use it anywhere you can use a regular Swing container.

Here is a picture of an application that creates a layered pane and places overlapping, colored labels at different depths: 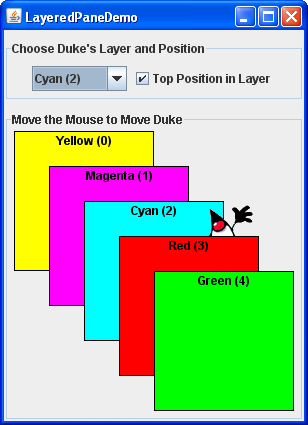 Here is the code from LayeredPaneDemo.java that creates the layered pane:

Here is the code from the sample program that adds the colored labels to the layered pane:

You can find the implementation of the createColoredLabel method in the source code for the program. It just creates an opaque JLabel initialized with a background color, a border, some text, and a size.

The example program uses a two-argument version of the add method. The first argument is the component to add, the second is an Integer object, specifying the depth. This program uses the for loop iteration variable to specify depths. The actual values do not matter much. What matters is the relative value of the depths and that you are consistent within your program in how you use each depth.

A note of caution:

When adding a component to a layered pane you specify the layer with an Integer . When using setLayer to change a component's layer, you use an int . You might think that if you use an int instead of an Integer with the add method, the compiler would complain or your program would throw an illegal argument exception. But the compiler says nothing, which results in a common layered pane problem. You can use the API tables at the end of this section to check the types of the arguments and return values for methods that deal with layers.

Setting a Component's Position Within Its Depth

The following code creates the label that displays Duke's image, and then adds the label to the layered pane.

This code uses the three-argument version of the add method. The third argument specifies the Duke label position within its depth, which determines the component's relationship with other components at the same depth.

Positions are specified with an int between -1 and ( n - 1), where n is the number of components at the depth. Unlike layer numbers, the smaller the position number, the higher the component within its depth. Using -1 is the same as using n - 1; it indicates the bottom-most position. Using 0 specifies that the component should be in the top-most position within its depth. As the following figure shows, with the exception of -1, a lower position number indicates a higher position within a depth.

A component's position within its layer can change dynamically. In the example, you can use the check box to determine whether Duke label is in the top position at its depth. Here's the actionPerformed method for the action listener registered on the check box:

When the user selects the check box, the moveToFront method moves Duke to the front (position 0). And when the user deselects check box, Duke gets moved to the back with the moveToBack method. You can also use the setPosition method or the three-argument version of setLayer to change a component's position.

Laying Out Components in a Layered Pane

By default a layered pane has no layout manager. This means that you typically have to write the code that positions and sizes the components you put in a layered pane.

The example uses the setBounds method to set the size and position of each of the labels:

When the user moves the mouse around, the program calls setPosition to change Duke's position: 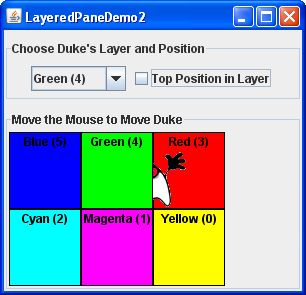 The following tables list the commonly used JLayeredPane constructors and methods. Other methods you are most likely to invoke on a JLayeredPane object are those it inherits from its superclasses, such as setBorder , setPreferredSize , and so on. See The JComponent API for tables of commonly used inherited methods.

The API for using layered pane falls into these categories:

Creating or Getting a Layered Pane

Examples that Use Layered Panes

This table shows the examples that use JLayeredPane and where those examples are described.