How to Use Panels

The JPanel class provides general-purpose containers for lightweight components. By default, panels do not add colors to anything except their own background; however, you can easily add borders to them and otherwise customize their painting. Details can be found in Performing Custom Painting.

In many types of look and feel, panels are opaque by default. Opaque panels work well as content panes and can help with painting efficiently, as described in Using Top-Level Containers. You can change a panel's transparency by invoking the setOpaque method. A transparent panel draws no background, so that any components underneath show through.

The following picture shows a colored version of the Converter application, which is discussed in more detail in Using Models. 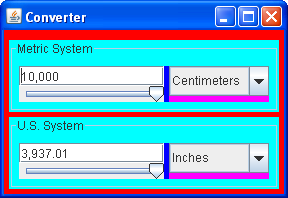 Here is what the Converter application normally looks like. 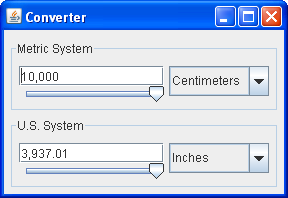 As the Converter example demonstrates, panels are useful for grouping components, simplifying component layout, and putting borders around groups of components. The rest of this section gives hints on grouping and laying out components. For information about using borders, see How to Use Borders.

Like other containers, a panel uses a layout manager to position and size its components. By default, a panel's layout manager is an instance of FlowLayout, which places the panel's contents in a row. You can easily make a panel use any other layout manager by invoking the setLayout method or by specifying a layout manager when creating the panel. The latter approach is preferable for performance reasons, since it avoids the unnecessary creation of a FlowLayout object.

Here is an example of how to set the layout manager when creating the panel.

This approach does not work with BoxLayout, since the BoxLayout constructor requires a pre-existing container. Here is an example that uses BoxLayout.

When you add components to a panel, you use the add method. Exactly which arguments you specify to the add method depend on which layout manager the panel uses. When the layout manager is FlowLayout, BoxLayout, GridLayout, or SpringLayout, you will typically use the one-argument add method, like this:

When the layout manager is BorderLayout, you need to provide an argument specifying the added component's position within the panel. For example:

With GridBagLayout you can use either add method, but you must somehow specify grid bag constraints for each component.

Examples That Use Panels

Many examples contained in this lesson use JPanel objects. The following table lists a few.