How to Use Progress Bars

Sometimes a task running within a program might take a while to complete. A user-friendly program provides some indication to the user that the task is occurring, how long the task might take, and how much work has already been done. One way of indicating work, and perhaps the amount of progress, is to use an animated image.

Another way of indicating work is to set the wait cursor, using the Cursor class and the Component-defined setCursor method. For example, the following code makes the wait cursor be displayed when the cursor is over container (including any components it contains that have no cursor specified):

To convey how complete a task is, you can use a progress bar like this one:

Swing provides three classes to help you use progress bars:

JProgressBar
A visible component to graphically display how much of a total task has completed. See Using Determinate Progress Bars for information and an example of using a typical progress bar. The section Using Indeterminate Mode tells you how to animate a progress bar to show activity before the task's scope is known.
ProgressMonitor
Not a visible component. Instead, an instance of this class monitors the progress of a task and pops up a dialog if necessary. See How to Use Progress Monitors for details and an example of using a progress monitor.
ProgressMonitorInputStream
An input stream with an attached progress monitor, which monitors reading from the stream. You use an instance of this stream like any of the other input streams described in Basic I/O. You can get the stream's progress monitor with a call to getProgressMonitor and configure it as described in How to Use Progress Monitors.

After you see a progress bar and a progress monitor in action, Deciding Whether to Use a Progress Bar or a Progress Monitor can help you figure out which is appropriate for your application.

Here's a picture of a small demo application that uses a progress bar to measure the progress of a task that runs in its own thread:

The following code, from ProgressBarDemo.java , creates and sets up the progress bar:

The call to setStringPainted causes the progress bar to display, within its bounds, a textual indication of the percentage of the task that has completed. By default, the progress bar displays the value returned by its getPercentComplete method formatted as a percent, such as 33%. Alternatively, you can replace the default with a different string by calling setString. For example,

When the user clicks Start, an instance of the inner class Task is created and executed.

Task is a subclass of javax.swing.SwingWorker . The Task instance does three important things for ProgressBarDemo:

See Worker Threads and SwingWorker in Concurrency in Swing for more information about SwingWorker.

The background task in ProgressBarDemo simulates a real task by reporting random amounts of progress at random intervals. The propertyChange method responds to changes in the the task's progress property by updating the progress bar:

When the background task is complete, the task's done method resets the progress bar:

In ProgressBarDemo2 indeterminate mode is set until actual progress begins:

One change we did not make was removing the call to progressBar.setValue from the progress event handler. The call doesn't do any harm because an indeterminate progress bar doesn't use its value property, except perhaps to display it in the status string. In fact, keeping the progress bar's data as up-to-date as possible is a good practice, since some look and feels might not support indeterminate mode.

How to Use Progress Monitors

Now let's rewrite ProgressBarDemo to use a progress monitor instead of a progress bar. Here's a picture of the new demo program, ProgressMonitorDemo: 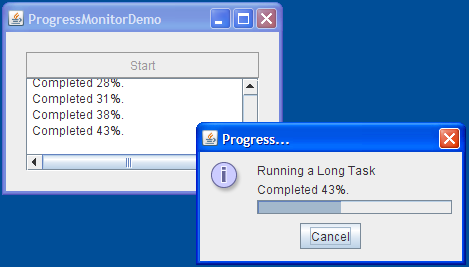 Here's the statement that creates the progress monitor:

This code uses ProgressMonitor's only constructor to create the monitor and initialize several arguments:

By the simple fact that this example uses a progress monitor, it adds a feature that wasn't present in the version of the program that uses a progress bar: The user can cancel the task by clicking the Cancel button on the dialog. Here's the code in the example that checks to see if the user canceled the task or if the task exited normally:

Note that the progress monitor doesn't itself cancel the task. It provides the GUI and API to allow the program to do so easily.

Use a progress bar if:

Use a progress monitor if:

If you decide to use a progress monitor and the task you are monitoring is reading from an input stream, use the ProgressMonitorInputStream class.

The API for monitoring progress falls into these categories:

If you are programming in JavaFX, see Progress Bar and Progress Indicator .