How to Use Scroll Panes

A JScrollPane provides a scrollable view of a component. When screen real estate is limited, use a scroll pane to display a component that is large or one whose size can change dynamically. Other containers used to save screen space include split panes and tabbed panes.

The code to create a scroll pane can be minimal. For example, here's a picture of a demo program that puts a text area in a scroll pane because the text area's size grows dynamically as text is appended to it:

You might have noticed that the preceding code sets the preferred size of the scroll pane's container. In the Java look and feel, this preferred size happens to be a bit less tall than required for the text area to display the 5 rows that we requested when creating it, so the scroll bar initially displays a vertical scroll bar. If we didn't restrict the size of the scroll pane's container, the scroll pane would be big enough for the text area to display the full 5 rows and 30 columns specified with the JTextArea constructor. Refer to Sizing a Scroll Pane for information about techniques for making a scroll pane the size you want.

The rest of this section discusses the following topics:

How a Scroll Pane Works

Here is a snapshot of an application that uses a customized scroll pane to view a photograph: 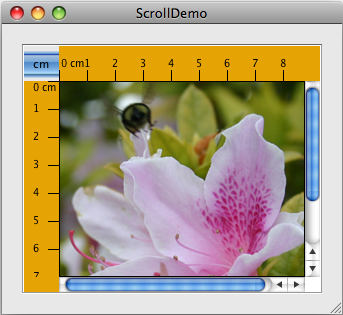 The scroll pane in this application looks very different from the one in the previous demo program. Rather than displaying text, this scroll pane contains a image. The scroll pane also has two scroll bars, a row header, a column header, and four corners, three of which have been customized.

When the user manipulates the scroll bars in a scroll pane, the area of the client that is visible changes accordingly. This picture shows the relationship between the scroll pane and its client and indicates the classes that the scroll pane commissions to help: 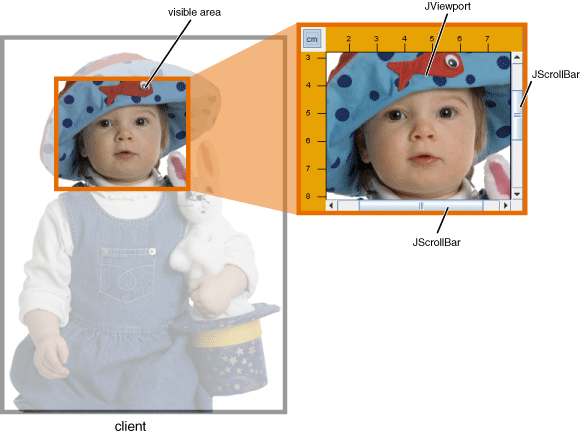 A scroll pane uses a JViewport instance to manage the visible area of the client. The viewport is responsible for positioning and sizing the client, based on the positions of the scroll bars, and displaying it.

A scroll pane may use two separate instances of JScrollBar for the scroll bars. The scroll bars provide the interface for the user to manipulate the visible area. The following figure shows the three areas of a scroll bar: the knob (sometimes called the thumb), the (arrow) buttons, and the track.

Typical programs don't directly instantiate or call methods on a viewport or scroll bar. Instead, programs achieve their scrolling behavior using the JScrollPane API and the API discussed in Implementing a Scrolling-Savvy Client. Some scrolling-savvy components such as JList, JTable, and JTree also provide additional API to help you affect their scrolling behavior.

ScrollDemo doesn't explicitly set the scroll pane's scroll bar policies — it uses the default. You can set the policies when you create the scroll pane or change them dynamically.

Of the constructors provided by JScrollPane, these two let you set the scroll bar policies when you create the scroll pane:

The first int specifies the policy for the vertical scroll bar; the second specifies the policy for the horizontal scroll bar. You can also set the policies dynamically with the setHorizontalScrollBarPolicy and setVerticalScrollBarPolicy methods. With both the constructors and the methods, use one of the following constants defined in the ScrollPaneConstants interface (which is implemented by JScrollPane):

The area drawn by a scroll pane consists of up to nine parts: the center, four sides, and four corners. The center is the only component that is always present in all scroll panes. Besides scroll bars, the sides can contain column and row headers. A corner component is visible only if both sides that intersect at that corner contain visible components. 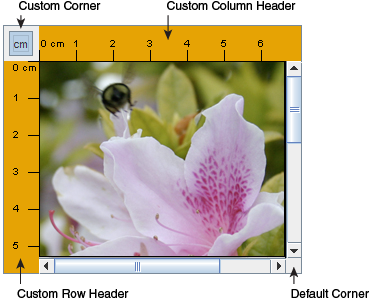 As shown in the figure, the scroll pane in ScrollDemo has custom row and column headers. Additionally, because all four sides are populated, all four corners are present. The program customizes three of the corners — two just fill their area with the same color as the Rules, and the other contains a toggle button. The fourth corner, the lower right corner, is the default provided by the scroll pane. Notice that because the row and column headers are always present in this example, the toggle button is also always present.

If a corner contains a control that the user needs access to all the time, make sure the sides that intersect at the corner are always present. For example, if this application placed the toggle in the lower right corner where the scroll bars intersect, then the toggle would disappear if the user resized the window and even one of the scroll bars disappeared.

As a JComponent subclass, our custom Rule class puts its rendering code in its paintComponent method. The Rule rendering code takes care to draw only within the current clipping bounds, to ensure speedy scrolling. Your custom row and column headers should do the same.

Remember that the size of each corner is determined by the size of the sides intersecting there. For some components you must take care that the specific instance of the component fits in its corner. For example, the program sets the font and margins on the toggle button so that it fits within the space established by the headers. It's not an issue with the Corner class because that class colors its entire bounds, whatever they happen to be, with a solid color.

As you can see from the code, constants indicate the corner positions. This figure shows the constant for each position:

The constants are defined in the ScrollPaneConstants interface, which JScrollPane implements.

To customize the way that a client component interacts with its scroll pane, you can make the component implement the Scrollable interface. By implementing Scrollable, a client can specify both the size of the viewport used to view it and the amount to scroll for clicks on the different controls on a scroll bar. You can also specify if the view should track the size of the viewport. This is typically used when the viewport is bigger than the view, but the view should fill the available space.

Note: If you can't or don't want to implement a scrollable client, you can specify the unit and block increments using the setUnitIncrement and setBlockIncrement methods of JScrollBar . For example, the following code sets the unit increment for vertical scrolling to 10 pixels:

Here again are the three control areas of a scroll bar: the knob, the buttons, and the track.

You might have noticed when manipulating the scroll bars in ScrollDemo that clicking the buttons scrolls the image to a tick boundary. You might also have noticed that clicking in the track scrolls the picture by a "screenful". More generally, the button scrolls the visible area by a unit increment and the track scrolls the visible area by a block increment. The behavior you see in the example is not the scroll pane's default behavior, but is specified by the client in its implementation of the Scrollable interface.

ScrollablePicture implements the Scrollable interface primarily to affect the unit and block increments. However, it must provide implementations for all five methods. Thus, it provides reasonable defaults for the other three methods that you might want to copy for your scrolling-savvy classes.

The scroll pane calls the client's getScrollableUnitIncrement method whenever the user clicks one of the buttons on the scroll bar. This is true as long as the client implements Scrollable. This method returns the number of pixels to scroll. An obvious implementation of this method returns the number of pixels between tick marks on the header rulers. ScrollablePicture, however, does something different: It returns the value required to position the image on a tick mark boundary. Here's the implementation:

Likewise, the scroll pane calls the client's getScrollableBlockIncrement method each time the user clicks on the track, but only if the client implements Scrollable. Here's ScrollablePicture's implementation of this method:

This method returns the height of the visible rectangle minus a tick mark. This behavior is typical, but true if scrolling vertically, otherwise, it's the width.A block increment should be slightly smaller than the viewport to leave a little of the previous visible area for context. For example, a text area might leave one or two lines of text for context and a table might leave a row or column (depending on the scroll direction).

ScrollablePicture.java has one more bit of code that's not required by the Scrollable interface, but is common in scrollable components: a mouse motion listener that lets the user scroll the picture by dragging from it. The boldface code in the following snippet implements scrolling by dragging:

This snippet scrolls the picture whenever the user drags from the picture to a location outside the picture and pauses. The setAutoscrolls method is defined by JComponent for the purpose of assisting — but not implementing — scrolling by dragging. Setting the autoscrolls property to true makes the component fire synthetic mouse-dragged events even when the mouse isn't moving (because it stopped, mid-drag, outside the component). It's up to the component's mouse motion listener to listen for these events and react accordingly.

Unless you explicitly set a scroll pane's preferred size, the scroll pane computes it based on the preferred size of its nine components (the viewport, and, if present, the two scroll bars, the row and column headers, and the four corners). The largest factor, and the one most programmers care about, is the size of the viewport used to display the client.

If the client is scrolling-savvy, then the scroll pane uses the value returned by the client's getPreferredScrollableViewportSize method to compute the size of its viewport. Implementations of this method generally report a preferred size for scrolling that's smaller than the component's standard preferred size. For example, by default, the value returned by JList's implementation of getPreferredScrollableViewportSize is just big enough to display eight rows.

Scrolling-savvy classes, like lists, tables, text components, and trees, often provide one or more methods that let programmers affect the size returned from getPreferredScrollableViewportSize. For example, you can set the number of visible rows in a list or a tree by calling the setVisibleRowCount method. The list or tree takes care of figuring out the size needed to display that number of rows.

Refer to Methods in Other Classes Related to Scrolling for information about scrolling-related methods provided by classes other than JScrollPane. And remember — if you don't like the value that getPreferredScrollableViewportSize returns, you can always set the preferred size of the scroll pane or its container.

Changing the size of a scroll pane's client is a two-step process. First, set the client's preferred size. Then, call revalidate on the client to let the scroll pane know that it should update itself and its scroll bars. Let's look at an example. 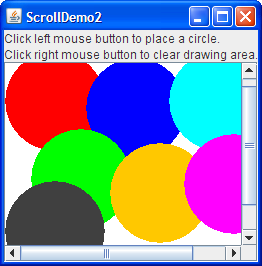 You can find the full source code for this example in ScrollDemo2.java , which is based on an example provided by tutorial reader John Vella. You can run ScrollDemo2 ( download JDK 7 or later ).

Here's the code that changes the drawing area's size when necessary:

Note that when the client changes size, the scroll bars adjust. The scroll pane doesn't resize, nor does the viewport.

Refer to SplitPaneDemo for another example in which the client object changes size.

The following tables list the commonly used scroll-related constructors and methods. Other methods you are most likely to invoke on a JScrollPane object are those such as setPreferredSize that its superclasses provide. See The JComponent API for tables of commonly used inherited methods.

The API for using scroll panes falls into these categories:

Examples that Use Scroll Panes

This table shows the examples that use JScrollPane and where those examples are described.

If you are programming in JavaFX, see Scroll Pane .