How to Use Split Panes

A JSplitPane displays two components, either side by side or one on top of the other. By dragging the divider that appears between the components, the user can specify how much of the split pane's total area goes to each component. You can divide screen space among three or more components by putting split panes inside of split panes, as described in Nesting Split Panes.

Here's a picture of an application that uses a split pane to display a list and an image side by side: 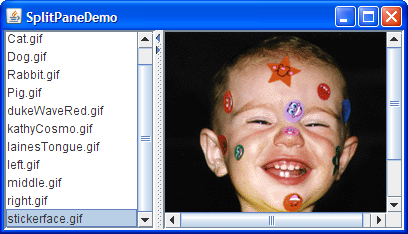 Below is the code from SplitPaneDemo that creates and sets up the split pane.

The constructor used by this example takes three arguments. The first indicates the split direction. The other arguments are the two components to put in the split pane. Refer to Setting the Components in a Split Pane for information about JSplitPane methods that set the components dynamically.

The split pane in this example is split horizontally — the two components appear side by side — as specified by the JSplitPane.HORIZONTAL_SPLIT argument to the constructor. Split pane provides one other option, specified with JSplitPane.VERTICAL_SPLIT, that places one component above the other. You can change the split direction after the split pane has been created with the setOrientation method.

Two small arrows appear at the top of the divider in the example's split pane. These arrows let the user collapse (and then expand) either of the components with a single click. The current look and feel determines whether these controls appear by default. In the Java look and feel, they are turned off by default. (Note that not all look and feels support this.) The example turned them on using the setOneTouchExpandable method.

The range of a split pane's divider is determined in part by the minimum sizes of the components within the split pane. See Positioning the Divider and Restricting its Range for details.

Setting the Components in a Split Pane

A program can set a split pane's two components dynamically with these four methods:

Like other containers, JSplitPane supports the add method. Split pane puts the first component added in the left or top position. The danger of using add is that you can inadvertantly call it too many times, in which case the split pane's layout manager will throw a rather esoteric-looking exception. If you are using the add method and a split pane is already populated, you first need to remove the existing components with remove.

If you put only one component in a split pane, then the divider will be stuck at the right side or the bottom of the split pane, depending on its split direction.

Positioning the Divider and Restricting Its Range

To make your split pane work well, you often need to set the minimum sizes of components in the split pane, as well as the preferred size of either the split pane or its contained components. Choosing which sizes you should set is an art that requires understanding how a split pane's preferred size and divider location are determined. Before we get into details, let's take another look at SplitPaneDemo. Or, if you're in a hurry, you can skip to the list of rules.

The user can drag the divider to any position as long as neither contained component goes below its minimum size. If the divider has one-touch buttons, the user can use them to make the divider move completely to one side or the other — no matter what the minimum sizes of the components are.

Now that you know the factors that affect a split pane's size and divider location, here are some rules for making them work well: 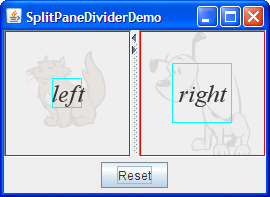 Here is the code that creates the GUI for SplitPaneDividerDemo:

The code is fairly self explanatory, except perhaps for the call to setContinuousLayout. Setting the continuousLayout property to true makes the split pane's contents be painted continuously while the user is moving the divider. Continuous layout is not on, by default, because it can have a negative performance impact. However, it makes sense to use it in this demo, when having the split pane's components as up-to-date as possible can improve the user experience.

Here's a picture of a program that achieves a three-way split by nesting one split pane inside of another: 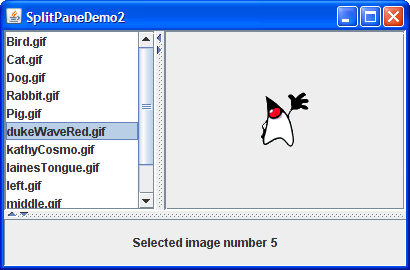 Here's the interesting part of the code, which you can find in SplitPaneDemo2.java :

Refer to Solving Common Component Problems for information about fixing a border problem that can appear when nesting split panes.

The following tables list the commonly used JSplitPane constructors and methods. Other methods you are most likely to invoke on a JSplitPane object are those such as setPreferredSize that its superclasses provide. See The JComponent API for tables of commonly used inherited methods.

The API for using lists falls into these categories:

Examples that Use Split Panes

This table shows some examples that use JSplitPane and where those examples are described.