How to Write a Key Listener

Key events indicate when the user is typing at the keyboard. Specifically, key events are fired by the component with the keyboard focus when the user presses or releases keyboard keys. For detailed information about focus, see How to Use the Focus Subsystem.

To define special reactions to particular keys, use key bindings instead of a key listener. For further information, see How to Use Key Bindings.

Notifications are sent about two basic kinds of key events:

The first kind of event is called a key-typed event. The second kind is either a key-pressed or key-released event.

To fire keyboard events, a component must have the keyboard focus.

To make a component get the keyboard focus, follow these steps:

on the component that is firing the key events. Your program must then handle focus traversal on its own. Alternatively, you can use the KeyEventDispatcher class to pre-listen to all key events. The focus page has detailed information on the focus subsystem.

You can obtain detailed information about a particular key-pressed event. For example, you can query a key-pressed event to determine if it was fired from an action key. Examples of action keys include Copy, Paste, Page Up, Undo, and the arrow and function keys. You can also query a key-pressed or key-released event to determine the location of the key that fired the event. Most key events are fired from the standard keyboard, but the events for some keys, such as Shift, have information on whether the user pressed the Shift key on the left or the right side of the keyboard. Likewise, the number '2' can be typed from either the standard keyboard or from the number pad.

For key-typed events you can obtain the key character value as well as any modifiers used.

You should not rely on the key character value returned from getKeyChar unless it is involved in a key-typed event.

The following example demonstrates key events. It consists of a text field that you can type into, followed by a text area that displays a message every time the text field fires a key event. A button at the bottom of the window lets you clear both the text field and text area. 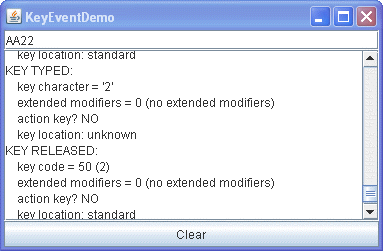 You can find the example's code in KeyEventDemo.java . Here is the demo's key event handling code:

The corresponding adapter class is KeyAdapter .

Examples that Use Key Listeners

The following table lists the examples that use key listeners.