Before you start creating a custom layout manager, make sure that no existing layout manager meets your requirements. In particular, layout managers such as GridBagLayout, SpringLayout, and BoxLayout are flexible enough to work in many cases. You can also find layout managers from other sources, such as from the Internet. Finally, you can simplify layout by grouping components into containers such as panels.

Every layout manager must implement at least the following five methods, which are required by the LayoutManager interface:

Besides implementing the preceding five methods, layout managers generally implement at least one public constructor and the toString method.

Of these methods, the most important are addLayoutComponent(Component, Object) and invalidateLayout(Container). The addLayoutComponent method is used to add components to the layout, using the specified constraint object. The invalidateLayout method is used to invalidate the layout, so that if the layout manager has cached information, this should be discarded. For more information about LayoutManager2, see the LayoutManager2 API documentation.

Finally, whenever you create custom layout managers, you should be careful of keeping references to Component instances that are no longer children of the Container. Namely, layout managers should override removeLayoutComponent to clear any cached state related to the Component.

Example of a Custom Layout 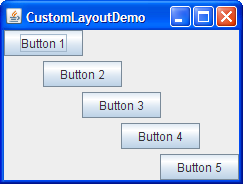