How to Use Modality in Dialogs

Java™ SE 6 has resolved modality issues that arose in earlier versions of the platform. The new modality model enables the developer to scope, or limit, a dialog box's modality blocking.

Before proceding with the new modality model, review the following terms:

In Java SE 6 the behavior of both modal and modeless dialog boxes has been changed so that they always appear on top of both not only of their parent windows and of all blocked windows as well.

The following modality types are supported in Java SE 6:

Additionally, you can set up the modality exclusion mode:

Note : The new modality model does not implement a system modality, which blocks all applications (including Java applications) that are displayed on the desktop while a modal dialog box is active.

The ModalityDemo example demonstrates the first three of the four modality types mentioned above. 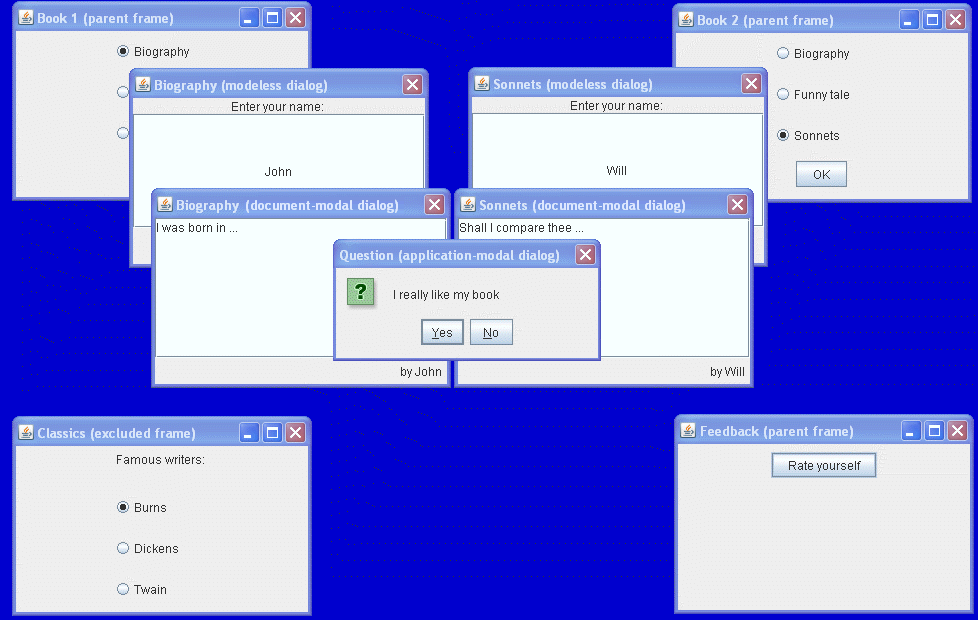 This figure has been reduced to fit on the page.
Click the image to view it at its natural size.
Try this:

Find the demo's complete code in the ModalityDemo.java file.

In Java SE 6 you can create a document-modal dialog box without a parent. Because the Dialog class is a subclass of the Window class, a Dialog instance automatically becomes the root of the document if it has no owner. Thus, if such a dialog box is document-modal, its scope of blocking is empty, and it behaves as if it were a modeless dialog box.

The following table lists methods inherited from the java.awt.Dialog class.

Examples That Use Modality API

The following table lists the example that uses modality in dialogs.