Next, we will add a custom drawing surface to the frame. For this we will create a subclass of javax.swing.JPanel (a generic lightweight container) which will supply the code for rendering our custom painting. 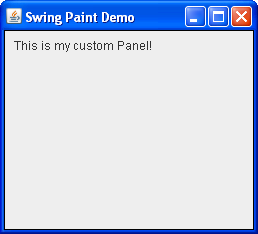 The first change you will notice is that we are now importing a number of additional classes, such as JPanel, Color, and Graphics. Since some of the older AWT classes are still used in modern Swing applications, it is normal to see the java.awt package in a few of the import statements. We have also defined a custom JPanel subclass, called MyPanel, which comprises the majority of the new code.

The MyPanel class definition has a constructor that sets a black border around its edges. This is a subtle detail that might be difficult to see at first (if it is, just comment out the invocation of setBorder and then recompile.) MyPanel also overrides getPreferredSize, which returns the desired width and height of the panel (in this case 250 is the width, 200 is the height.) Because of this, the SwingPaintDemo class no longer needs to specify the size of the frame in pixels. It simply adds the panel to the frame and then invokes pack.

The paintComponent method is where all of your custom painting takes place. This method is defined by javax.swing.JComponent and then overridden by your subclasses to provide their custom behavior. Its sole parameter, a java.awt.Graphics object, exposes a number of methods for drawing 2D shapes and obtaining information about the application's graphics environment. In most cases the object that is actually received by this method will be an instance of java.awt.Graphics2D (a Graphics subclass), which provides support for sophisticated 2D graphics rendering.

Most of the standard Swing components have their look and feel implemented by separate "UI Delegate" objects. The invocation of super.paintComponent(g) passes the graphics context off to the component's UI delegate, which paints the panel's background. For a closer look at this process, see the section entitled "Painting and the UI Delegate" in the aforementioned SDN article.