Log4j2 Manual
Back to index

Log4j uses the classes shown in the diagram below. 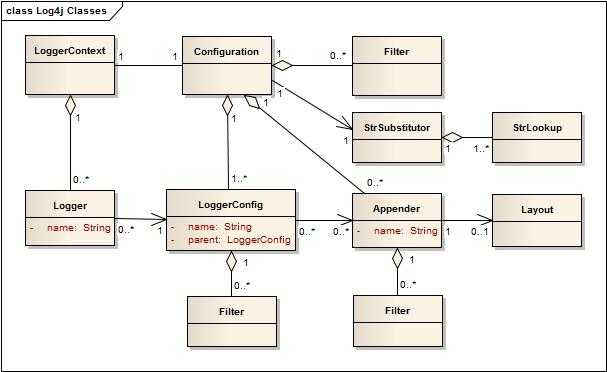 The first and foremost advantage of any logging API over plain System.out.println resides in its ability to disable certain log statements while allowing others to print unhindered. This capability assumes that the logging space, that is, the space of all possible logging statements, is categorized according to some developer-chosen criteria.

Loggers and LoggerConfigs are named entities. Logger names are case-sensitive and they follow the hierarchical naming rule:

All other Loggers can be retrieved using the LogManager.getLogger static method by passing the name of the desired Logger. Further information on the Logging API can be found in the Log4j 2 API .

As stated previously, Loggers are created by calling LogManager.getLogger . The Logger itself performs no direct actions. It simply has a name and is associated with a LoggerConfig. It extends AbstractLogger and implements the required methods. As the configuration is modified Loggers may become associated with a different LoggerConfig, thus causing their behavior to be modified.

Calling the LogManager.getLogger method with the same name will always return a reference to the exact same Logger object.

x and y refer to exactly the same Logger object.

Configuration of the log4j environment is typically done at application initialization. The preferred way is by reading a configuration file. This is discussed in Configuration.

Log4j makes it easy to name Loggers by software component. This can be accomplished by instantiating a Logger in each class, with the logger name equal to the fully qualified name of the class. This is a useful and straightforward method of defining loggers. As the log output bears the name of the generating Logger, this naming strategy makes it easy to identify the origin of a log message. However, this is only one possible, albeit common, strategy for naming loggers. Log4j does not restrict the possible set of loggers. The developer is free to name the loggers as desired.

Since naming Loggers after their owning class is such a common idiom, the convenience method LogManager.getLogger() is provided to automatically use the calling class's fully qualified class name as the Logger name.

Nevertheless, naming loggers after the class where they are located seems to be the best strategy known so far.

LoggerConfig objects are created when Loggers are declared in the logging configuration. The LoggerConfig contains a set of Filters that must allow the LogEvent to pass before it will be passed to any Appenders. It contains references to the set of Appenders that should be used to process the event.

LoggerConfigs will be assigned a Log Level . The set of built-in levels includes TRACE, DEBUG, INFO, WARN, ERROR, and FATAL. Log4j 2 also supports custom log levels. Another mechanism for getting more granularity is to use Markers instead.

Log4j 1.x and Logback both have the concept of "Level Inheritance". In Log4j 2, Loggers and LoggerConfigs are two different objects so this concept is implemented differently. Each Logger references the appropriate LoggerConfig which in turn can reference its parent, thus achieving the same effect.

Below are five tables with various assigned level values and the resulting levels that will be associated with each Logger. Note that in all these cases if the root LoggerConfig is not configured a default Level will be assigned to it.

In example 1 above, only the root logger is configured and has a Log Level. All the other Loggers reference the root LoggerConfig and use its Level.

In example 2, all loggers have a configured LoggerConfig and obtain their Level from it.

The ability to selectively enable or disable logging requests based on their logger is only part of the picture. Log4j allows logging requests to print to multiple destinations. In log4j speak, an output destination is called an Appender . Currently, appenders exist for the console, files, remote socket servers, Apache Flume, JMS, remote UNIX Syslog daemons, and various database APIs. See the section on Appenders for more details on the various types available. More than one Appender can be attached to a Logger.

An Appender can be added to a Logger by calling the addLoggerAppender method of the current Configuration. If a LoggerConfig matching the name of the Logger does not exist, one will be created, the Appender will be attached to it and then all Loggers will be notified to update their LoggerConfig references.

The rules governing appender additivity are summarized below.

The output of a log statement of Logger L will go to all the Appenders in the LoggerConfig associated with L and the ancestors of that LoggerConfig. This is the meaning of the term "appender additivity".

However, if an ancestor of the LoggerConfig associated with Logger L, say P, has the additivity flag set to false, then L's output will be directed to all the appenders in L's LoggerConfig and it's ancestors up to and including P but not the Appenders in any of the ancestors of P.

Loggers have their additivity flag set to true by default.

The table below shows an example:

More often than not, users wish to customize not only the output destination but also the output format. This is accomplished by associating a Layout with an Appender. The Layout is responsible for formatting the LogEvent according to the user's wishes, whereas an appender takes care of sending the formatted output to its destination. The PatternLayout , part of the standard log4j distribution, lets the user specify the output format according to conversion patterns similar to the C language printf function.

For example, the PatternLayout with the conversion pattern "%r [%t] %-5p %c - %m%n" will output something akin to:

Log4j comes with many different Layouts for various use cases such as JSON, XML, HTML, and Syslog (including the new RFC 5424 version). Other appenders such as the database connectors fill in specified fields instead of a particular textual layout.

Just as importantly, log4j will render the content of the log message according to user specified criteria. For example, if you frequently need to log Oranges, an object type used in your current project, then you can create an OrangeMessage that accepts an Orange instance and pass that to Log4j so that the Orange object can be formatted into an appropriate byte array when required.

The StrSubstitutor class and StrLookup interface were borrowed from Apache Commons Lang and then modified to support evaluating LogEvents. In addition the Interpolator class was borrowed from Apache Commons Configuration to allow the StrSubstitutor to evaluate variables that from multiple StrLookups. It too was modified to support evaluating LogEvents. Together these provide a mechanism to allow the configuration to reference variables coming from System Properties, the configuration file, the ThreadContext Map, StructuredData in the LogEvent. The variables can either be resolved when the configuration is processed or as each event is processed, if the component is capable of handling it. See Lookups for more information.