The buffer pool is an area in main memory where InnoDB caches table and index data as it is accessed. The buffer pool permits frequently used data to be processed directly from memory, which speeds up processing. On dedicated servers, up to 80% of physical memory is often assigned to the buffer pool.

Knowing how to take advantage of the buffer pool to keep frequently accessed data in memory is an important aspect of MySQL tuning. 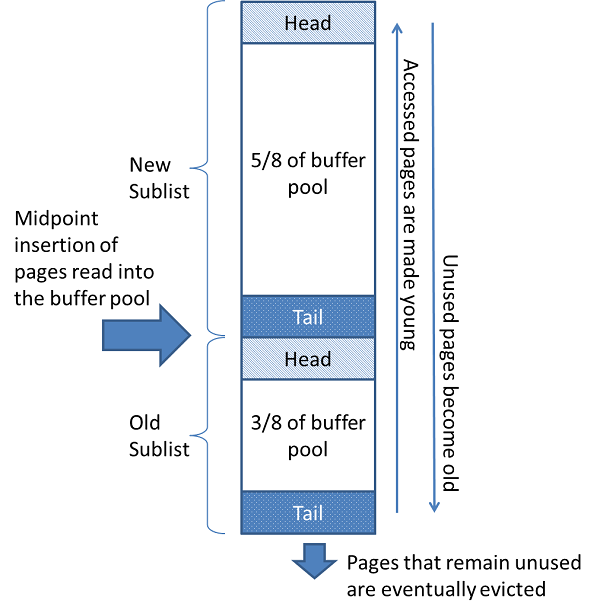 The algorithm keeps heavily pages in the new sublist. The old sublist contains less-used pages; these pages are candidates for eviction.

By default, the algorithm operates as follows:

By default, pages read by queries are immediately moved into the new sublist, meaning they stay in the buffer pool longer. A table scan, performed for a mysqldump operation or a SELECT statement with no WHERE clause, for example, can bring a large amount of data into the buffer pool and evict an equivalent amount of older data, even if the new data is never used again. Similarly, pages that are loaded by the read-ahead background thread and accessed only once are moved to the head of the new list. These situations can push frequently used pages to the old sublist where they become subject to eviction. For information about optimizing this behavior, see Section 14.8.3.3, “Making the Buffer Pool Scan Resistant”, and Section 14.8.3.4, “Configuring InnoDB Buffer Pool Prefetching (Read-Ahead)”.

You can configure the various aspects of the buffer pool to improve performance.