This section discusses the manner in which NDB Cluster divides and duplicates data for storage.

A number of concepts central to an understanding of this topic are discussed in the next few paragraphs.

Data node.  An ndbd or ndbmtd process, which stores one or more replicas—that is, copies of the partitions (discussed later in this section) assigned to the node group of which the node is a member.

Each data node should be located on a separate computer. While it is also possible to host multiple data node processes on a single computer, such a configuration is not usually recommended.

It is common for the terms “node” and “data node” to be used interchangeably when referring to an ndbd or ndbmtd process; where mentioned, management nodes (ndb_mgmd processes) and SQL nodes (mysqld processes) are specified as such in this discussion.

Node group.  A node group consists of one or more nodes, and stores partitions, or sets of replicas (see next item).

All node groups in an NDB Cluster must have the same number of data nodes.

Partition.  This is a portion of the data stored by the cluster. Each node is responsible for keeping at least one copy of any partitions assigned to it (that is, at least one replica) available to the cluster.

Replica.  This is a copy of a cluster partition. Each node in a node group stores a replica. Also sometimes known as a partition replica. The number of replicas is equal to the number of nodes per node group.

A replica belongs entirely to a single node; a node can (and usually does) store several replicas.

Only data nodes are shown here; although a working NDB Cluster requires an ndb_mgmd process for cluster management and at least one SQL node to access the data stored by the cluster, these have been omitted from the figure for clarity. 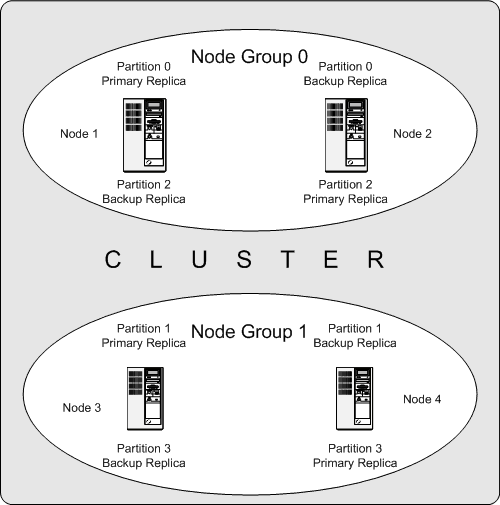 The data stored by the cluster is divided into four partitions, numbered 0, 1, 2, and 3. Each partition is stored—in multiple copies—on the same node group. Partitions are stored on alternate node groups as follows:

What this means regarding the continued operation of an NDB Cluster is this: so long as each node group participating in the cluster has at least one node operating, the cluster has a complete copy of all data and remains viable. This is illustrated in the next diagram. 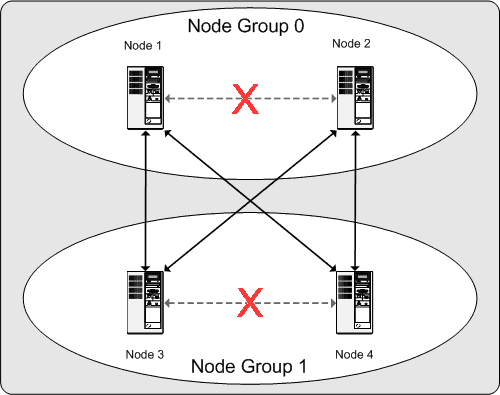