NDB Cluster is a technology that enables clustering of in-memory databases in a shared-nothing system. The shared-nothing architecture enables the system to work with very inexpensive hardware, and with a minimum of specific requirements for hardware or software.

NDB Cluster is designed not to have any single point of failure. In a shared-nothing system, each component is expected to have its own memory and disk, and the use of shared storage mechanisms such as network shares, network file systems, and SANs is not recommended or supported.

An NDB Cluster consists of a set of computers, known as hosts, each running one or more processes. These processes, known as nodes, may include MySQL servers (for access to NDB data), data nodes (for storage of the data), one or more management servers, and possibly other specialized data access programs. The relationship of these components in an NDB Cluster is shown here: 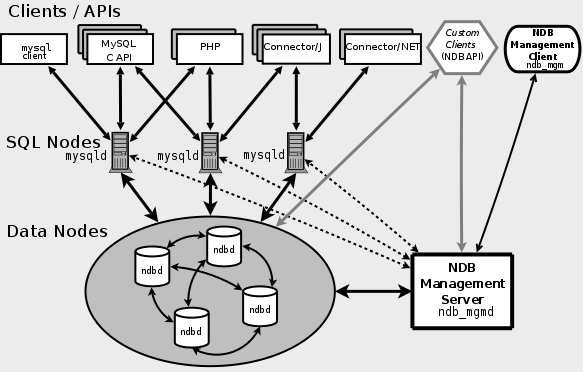 All these programs work together to form an NDB Cluster (see Section 21.4, “NDB Cluster Programs”. When data is stored by the NDB storage engine, the tables (and table data) are stored in the data nodes. Such tables are directly accessible from all other MySQL servers (SQL nodes) in the cluster. Thus, in a payroll application storing data in a cluster, if one application updates the salary of an employee, all other MySQL servers that query this data can see this change immediately.

Although an NDB Cluster SQL node uses the mysqld server daemon, it differs in a number of critical respects from the mysqld binary supplied with the MySQL 5.7 distributions, and the two versions of mysqld are not interchangeable.

In addition, a MySQL server that is not connected to an NDB Cluster cannot use the NDB storage engine and cannot access any NDB Cluster data.

The data stored in the data nodes for NDB Cluster can be mirrored; the cluster can handle failures of individual data nodes with no other impact than that a small number of transactions are aborted due to losing the transaction state. Because transactional applications are expected to handle transaction failure, this should not be a source of problems.

Individual nodes can be stopped and restarted, and can then rejoin the system (cluster). Rolling restarts (in which all nodes are restarted in turn) are used in making configuration changes and software upgrades (see Section 21.5.5, “Performing a Rolling Restart of an NDB Cluster”). Rolling restarts are also used as part of the process of adding new data nodes online (see Section 21.5.7, “Adding NDB Cluster Data Nodes Online”). For more information about data nodes, how they are organized in an NDB Cluster, and how they handle and store NDB Cluster data, see Section 21.1.2, “NDB Cluster Nodes, Node Groups, Replicas, and Partitions”.

Backing up and restoring NDB Cluster databases can be done using the NDB-native functionality found in the NDB Cluster management client and the ndb_restore program included in the NDB Cluster distribution. For more information, see Section 21.5.8, “Online Backup of NDB Cluster”, and Section 21.4.24, “ndb_restore — Restore an NDB Cluster Backup”. You can also use the standard MySQL functionality provided for this purpose in mysqldump and the MySQL server. See Section 4.5.4, “mysqldump — A Database Backup Program”, for more information.