This section discusses known problems or issues when using replication with NDB Cluster.

Loss of connection between source and replica.  A loss of connection can occur either between the source cluster SQL node and the replica cluster SQL node, or between the source SQL node and the data nodes of the source cluster. In the latter case, this can occur not only as a result of loss of physical connection (for example, a broken network cable), but due to the overflow of data node event buffers; if the SQL node is too slow to respond, it may be dropped by the cluster (this is controllable to some degree by adjusting the MaxBufferedEpochs and TimeBetweenEpochs configuration parameters). If this occurs, it is entirely possible for new data to be inserted into the source cluster without being recorded in the source SQL node's binary log. For this reason, to guarantee high availability, it is extremely important to maintain a backup replication channel, to monitor the primary channel, and to fail over to the secondary replication channel when necessary to keep the replica cluster synchronized with the source. NDB Cluster is not designed to perform such monitoring on its own; for this, an external application is required.

The source SQL node issues a “gap” event when connecting or reconnecting to the source cluster. (A gap event is a type of “incident event,” which indicates an incident that occurs that affects the contents of the database but that cannot easily be represented as a set of changes. Examples of incidents are server failures, database resynchronization, some software updates, and some hardware changes.) When the replica encounters a gap in the replication log, it stops with an error message. This message is available in the output of SHOW SLAVE STATUS, and indicates that the SQL thread has stopped due to an incident registered in the replication stream, and that manual intervention is required. See Section 21.6.8, “Implementing Failover with NDB Cluster Replication”, for more information about what to do in such circumstances.

Because NDB Cluster is not designed on its own to monitor replication status or provide failover, if high availability is a requirement for the replica server or cluster, then you must set up multiple replication lines, monitor the source mysqld on the primary replication line, and be prepared fail over to a secondary line if and as necessary. This must be done manually, or possibly by means of a third-party application. For information about implementing this type of setup, see Section 21.6.7, “Using Two Replication Channels for NDB Cluster Replication”, and Section 21.6.8, “Implementing Failover with NDB Cluster Replication”.

If you are replicating from a standalone MySQL server to an NDB Cluster, one channel is usually sufficient.

Circular replication using these clusters is supported as long as the following conditions are met:

This type of circular replication setup is shown in the following diagram:

Figure 21.44 NDB Cluster Circular Replication With All Sources As Replicas 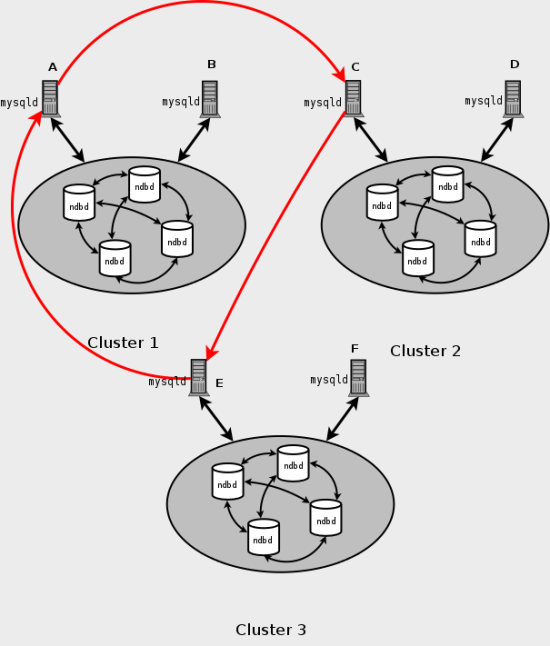 It should also be possible to set up circular replication in which not all source SQL nodes are also replicas, as shown here:

Figure 21.45 NDB Cluster Circular Replication Where Not All Sources Are Replicas 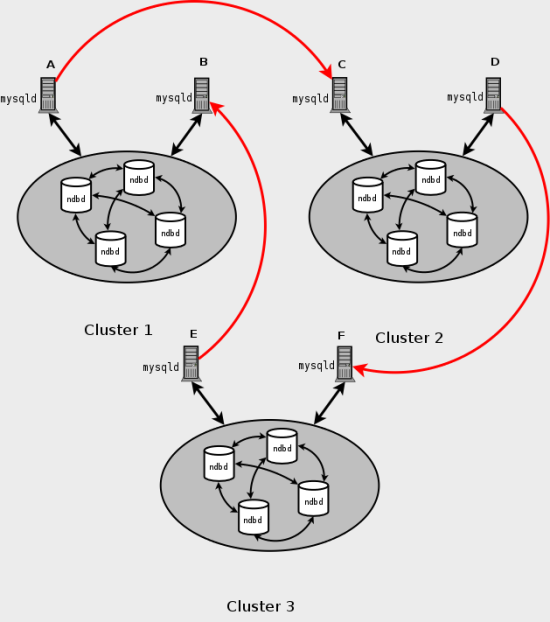 In this case, different SQL nodes in each cluster are used as sources and replicas. However, you must not start any of the SQL nodes with the log_slave_updates system variable enabled. This type of circular replication scheme for NDB Cluster, in which the line of replication (again indicated by the curved arrows in the diagram) is discontinuous, should be possible, but it should be noted that it has not yet been thoroughly tested and must therefore still be considered experimental.

The NDB storage engine uses idempotent execution mode, which suppresses duplicate-key and other errors that otherwise break circular replication of NDB Cluster. This is equivalent to setting the global slave_exec_mode system variable to IDEMPOTENT, although this is not necessary in NDB Cluster replication, since NDB Cluster sets this variable automatically and ignores any attempts to set it explicitly.

NDB Cluster replication and primary keys.  In the event of a node failure, errors in replication of NDB tables without primary keys can still occur, due to the possibility of duplicate rows being inserted in such cases. For this reason, it is highly recommended that all NDB tables being replicated have explicit primary keys.

NDB Cluster Replication and Unique Keys.  In older versions of NDB Cluster, operations that updated values of unique key columns of NDB tables could result in duplicate-key errors when replicated. This issue is solved for replication between NDB tables by deferring unique key checks until after all table row updates have been performed.

Deferring constraints in this way is currently supported only by NDB. Thus, updates of unique keys when replicating from NDB to a different storage engine such as InnoDB or MyISAM are still not supported.

The problem encountered when replicating without deferred checking of unique key updates can be illustrated using NDB table such as t, is created and populated on the source (and transmitted to a replica that does not support deferred unique key updates) as shown here:

The following UPDATE statement on t succeeds on the source, since the rows affected are processed in the order determined by the ORDER BY option, performed over the entire table:

The same statement fails with a duplicate key error or other constraint violation on the replica, because the ordering of the row updates is performed for one partition at a time, rather than for the table as a whole.

Every NDB table is implicitly partitioned by key when it is created. See Section 22.2.5, “KEY Partitioning”, for more information.

This is because the replica may not be able to separate transactions occurring in one database from those in another if they are written within the same epoch. In addition, every transaction handled by the NDB storage engine involves at least two databases—the target database and the mysql system database—due to the requirement for updating the mysql.ndb_apply_status table (see Section 21.6.4, “NDB Cluster Replication Schema and Tables”). This in turn breaks the requirement for multithreading that the transaction is specific to a given database.

Restarting with --initial.  Restarting the cluster with the --initial option causes the sequence of GCI and epoch numbers to start over from 0. (This is generally true of NDB Cluster and not limited to replication scenarios involving Cluster.) The MySQL servers involved in replication should in this case be restarted. After this, you should use the RESET MASTER and RESET SLAVE statements to clear the invalid ndb_binlog_index and ndb_apply_status tables, respectively.

Replication from NDB to other storage engines.  It is possible to replicate an NDB table on the source to a table using a different storage engine on the replica, taking into account the restrictions listed here:

The next few paragraphs provide additional information about each of the issues just described.

In addition, it is not possible to configure more than one replication channel when replicating between NDB and a different storage engine. (An NDB Cluster database can simultaneously replicate to multiple NDB Cluster databases.) If the source uses NDB tables, it is still possible to have more than one MySQL Server maintain a binary log of all changes, but for the replica to change sources (fail over), the new source-replica relationship must be explicitly defined on the replica.

Replicating NDB tables to a storage engine that does not perform binary logging.  If you attempt to replicate from an NDB Cluster to a replica that uses a storage engine that does not handle its own binary logging, the replication process aborts with the error Binary logging not possible ... Statement cannot be written atomically since more than one engine involved and at least one engine is self-logging (Error 1595). It is possible to work around this issue in one of the following ways:

You should not disable replication or binary logging of mysql.ndb_apply_status or change the storage engine used for this table when replicating from one NDB Cluster to another. See Replication and binary log filtering rules with replication between NDB Clusters, for details.

You should also remember that each replication rule requires the following:

If you are replicating an NDB Cluster to a replica that uses a storage engine other than NDB, the considerations just given previously may not apply, as discussed elsewhere in this section.

NDB Cluster Replication and IPv6.  Currently, the NDB API and MGM API do not support IPv6. However, MySQL Servers—including those acting as SQL nodes in an NDB Cluster—can use IPv6 to contact other MySQL Servers. This means that you can replicate between NDB Clusters using IPv6 to connect the source and replica SQL nodes as shown by the dotted arrow in the following diagram: 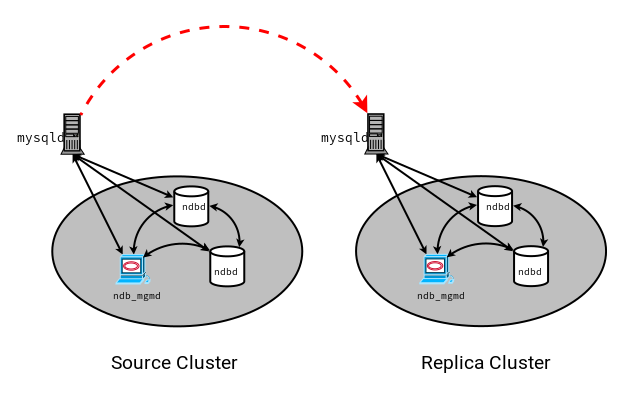 All connections originating within the NDB Cluster —represented in the preceding diagram by solid arrows—must use IPv4. In other words, all NDB Cluster data nodes, management servers, and management clients must be accessible from one another using IPv4. In addition, SQL nodes must use IPv4 to communicate with the cluster.

Since there is currently no support in the NDB and MGM APIs for IPv6, any applications written using these APIs must also make all connections using IPv4.

NDB, unlike InnoDB or MyISAM, does not write changes to virtual columns to the binary log; however, this has no detrimental effects on NDB Cluster Replication or replication between NDB and other storage engines. Changes to stored generated columns are logged.