This section provides information about compatibility between different NDB Cluster 7.5 releases with regard to performing upgrades and downgrades as well as compatibility matrices and notes. Additional information can also be found here regarding downgrades from NDB 7.5 to previous NDB release series. You should already be familiar with installing and configuring NDB Cluster prior to attempting an upgrade or downgrade. See Section 21.3, “Configuration of NDB Cluster”.

Schema operations, including SQL DDL statements, cannot be performed while any data nodes are restarting, and thus during an online upgrade or downgrade of the cluster. For other information regarding the rolling restart procedure used to perform an online upgrade, see Section 21.5.5, “Performing a Rolling Restart of an NDB Cluster”.

Only compatibility between MySQL versions with regard to NDBCLUSTER is taken into account in this section, and there are likely other issues to be considered. As with any other MySQL software upgrade or downgrade, you are strongly encouraged to review the relevant portions of the MySQL Manual for the MySQL versions from which and to which you intend to migrate, before attempting an upgrade or downgrade of the NDB Cluster software. See Section 2.11, “Upgrading MySQL”. For information about upgrades to NDB 7.6, see Section 21.2.9.2, “Upgrading and Downgrading NDB 7.6”.

The table shown here provides information on NDB Cluster upgrade and downgrade compatibility among different releases of NDB 7.5. Additional notes about upgrades and downgrades to, from, or within the NDB Cluster 7.5 release series can be found following the table. 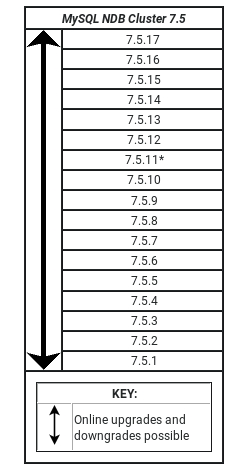 Known Issues.  The following issues are known to occur when upgrading to or between NDB 7.5 releases: