GrantedAuthority is an interface with only one method:

An example of a "complex" GrantedAuthority would be an implementation that stores a list of operations and authority thresholds that apply to different customer account numbers. Representing this complex GrantedAuthority as a String would be quite difficult, and as a result the getAuthority() method should return null . This will indicate to any AccessDecisionManager that it will need to specifically support the GrantedAuthority implementation in order to understand its contents.

As we’ve also seen in the Technical Overview chapter, Spring Security provides interceptors which control access to secure objects such as method invocations or web requests. A pre-invocation decision on whether the invocation is allowed to proceed is made by the AccessDecisionManager .

The AccessDecisionManager 's decide method is passed all the relevant information it needs in order to make an authorization decision. In particular, passing the secure Object enables those arguments contained in the actual secure object invocation to be inspected. For example, let’s assume the secure object was a MethodInvocation . It would be easy to query the MethodInvocation for any Customer argument, and then implement some sort of security logic in the AccessDecisionManager to ensure the principal is permitted to operate on that customer. Implementations are expected to throw an AccessDeniedException if access is denied.

The supports(ConfigAttribute) method is called by the AbstractSecurityInterceptor at startup time to determine if the AccessDecisionManager can process the passed ConfigAttribute . The supports(Class) method is called by a security interceptor implementation to ensure the configured AccessDecisionManager supports the type of secure object that the security interceptor will present. 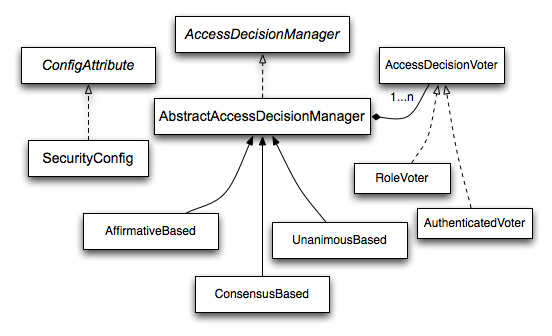 Using this approach, a series of AccessDecisionVoter implementations are polled on an authorization decision. The AccessDecisionManager then decides whether or not to throw an AccessDeniedException based on its assessment of the votes.

The AccessDecisionVoter interface has three methods:

Concrete implementations return an int , with possible values being reflected in the AccessDecisionVoter static fields ACCESS_ABSTAIN , ACCESS_DENIED and ACCESS_GRANTED . A voting implementation will return ACCESS_ABSTAIN if it has no opinion on an authorization decision. If it does have an opinion, it must return either ACCESS_DENIED or ACCESS_GRANTED .

There are three concrete AccessDecisionManager s provided with Spring Security that tally the votes. The ConsensusBased implementation will grant or deny access based on the consensus of non-abstain votes. Properties are provided to control behavior in the event of an equality of votes or if all votes are abstain. The AffirmativeBased implementation will grant access if one or more ACCESS_GRANTED votes were received (i.e. a deny vote will be ignored, provided there was at least one grant vote). Like the ConsensusBased implementation, there is a parameter that controls the behavior if all voters abstain. The UnanimousBased provider expects unanimous ACCESS_GRANTED votes in order to grant access, ignoring abstains. It will deny access if there is any ACCESS_DENIED vote. Like the other implementations, there is a parameter that controls the behaviour if all voters abstain.

The most commonly used AccessDecisionVoter provided with Spring Security is the simple RoleVoter , which treats configuration attributes as simple role names and votes to grant access if the user has been assigned that role.

When we’ve used the attribute IS_AUTHENTICATED_ANONYMOUSLY to grant anonymous access, this attribute was being processed by the AuthenticatedVoter . See the Javadoc for this class for more information.

Obviously, you can also implement a custom AccessDecisionVoter and you can put just about any access-control logic you want in it. It might be specific to your application (business-logic related) or it might implement some security administration logic. For example, you’ll find a blog article on the Spring web site which describes how to use a voter to deny access in real-time to users whose accounts have been suspended.

Whilst the AccessDecisionManager is called by the AbstractSecurityInterceptor before proceeding with the secure object invocation, some applications need a way of modifying the object actually returned by the secure object invocation. Whilst you could easily implement your own AOP concern to achieve this, Spring Security provides a convenient hook that has several concrete implementations that integrate with its ACL capabilities.

It is a common requirement that a particular role in an application should automatically "include" other roles. For example, in an application which has the concept of an "admin" and a "user" role, you may want an admin to be able to do everything a normal user can. To achieve this, you can either make sure that all admin users are also assigned the "user" role. Alternatively, you can modify every access constraint which requires the "user" role to also include the "admin" role. This can get quite complicated if you have a lot of different roles in your application.

The use of a role-hierarchy allows you to configure which roles (or authorities) should include others. An extended version of Spring Security’s RoleVoter, RoleHierarchyVoter , is configured with a RoleHierarchy , from which it obtains all the "reachable authorities" which the user is assigned. A typical configuration might look like this:

Here we have four roles in a hierarchy ROLE_ADMIN ⇒ ROLE_STAFF ⇒ ROLE_USER ⇒ ROLE_GUEST . A user who is authenticated with ROLE_ADMIN , will behave as if they have all four roles when security constraints are evaluated against an AccessDecisionManager cconfigured with the above RoleHierarchyVoter . The > symbol can be thought of as meaning "includes".

Role hierarchies offer a convenient means of simplifying the access-control configuration data for your application and/or reducing the number of authorities which you need to assign to a user. For more complex requirements you may wish to define a logical mapping between the specific access-rights your application requires and the roles that are assigned to users, translating between the two when loading the user information.