Many batch processing problems can be solved with single threaded, single process jobs, so it is always a good idea to properly check if that meets your needs before thinking about more complex implementations. Measure the performance of a realistic job and see if the simplest implementation meets your needs first. You can read and write a file of several hundred megabytes in well under a minute, even with standard hardware.

When you are ready to start implementing a job with some parallel processing, Spring Batch offers a range of options, which are described in this chapter, although some features are covered elsewhere. At a high level, there are two modes of parallel processing:

These break down into categories as well, as follows:

The simplest way to start parallel processing is to add a TaskExecutor to your Step configuration.

For example, you might add an attribute of the tasklet , as shown in the following example:

When using java configuration, a TaskExecutor can be added to the step as shown in the following example:

The result of the above configuration is that the Step executes by reading, processing, and writing each chunk of items (each commit interval) in a separate thread of execution. Note that this means there is no fixed order for the items to be processed, and a chunk might contain items that are non-consecutive compared to the single-threaded case. In addition to any limits placed by the task executor (such as whether it is backed by a thread pool), there is a throttle limit in the tasklet configuration which defaults to 4. You may need to increase this to ensure that a thread pool is fully utilized.

For example you might increase the throttle-limit, as shown in the following example:

When using java configuration, the builders provide access to the throttle limit:

Note also that there may be limits placed on concurrency by any pooled resources used in your step, such as a DataSource . Be sure to make the pool in those resources at least as large as the desired number of concurrent threads in the step.

There are some practical limitations of using multi-threaded Step implementations for some common batch use cases. Many participants in a Step (such as readers and writers) are stateful. If the state is not segregated by thread, then those components are not usable in a multi-threaded Step . In particular, most of the off-the-shelf readers and writers from Spring Batch are not designed for multi-threaded use. It is, however, possible to work with stateless or thread safe readers and writers, and there is a sample (called parallelJob ) in the Spring Batch Samples that shows the use of a process indicator (see Preventing State Persistence) to keep track of items that have been processed in a database input table.

Spring Batch provides some implementations of ItemWriter and ItemReader . Usually, they say in the Javadoc if they are thread safe or not or what you have to do to avoid problems in a concurrent environment. If there is no information in the Javadoc, you can check the implementation to see if there is any state. If a reader is not thread safe, you can decorate it with the provided SynchronizedItemStreamReader or use it in your own synchronizing delegator. You can synchronize the call to read() and as long as the processing and writing is the most expensive part of the chunk, your step may still complete much faster than it would in a single threaded configuration.

As long as the application logic that needs to be parallelized can be split into distinct responsibilities and assigned to individual steps, then it can be parallelized in a single process. Parallel Step execution is easy to configure and use.

For example, executing steps (step1,step2) in parallel with step3 is straightforward, as shown in the following example:

When using java configuration, executing steps (step1,step2) in parallel with step3 is straightforward, as shown in the following example:

The configurable task executor is used to specify which TaskExecutor implementation should be used to execute the individual flows. The default is SyncTaskExecutor , but an asynchronous TaskExecutor is required to run the steps in parallel. Note that the job ensures that every flow in the split completes before aggregating the exit statuses and transitioning.

See the section on Split Flows for more detail.

In remote chunking, the Step processing is split across multiple processes, communicating with each other through some middleware. The following image shows the pattern:

The master component is a single process, and the slaves are multiple remote processes. This pattern works best if the master is not a bottleneck, so the processing must be more expensive than the reading of items (as is often the case in practice).

The master is an implementation of a Spring Batch Step with the ItemWriter replaced by a generic version that knows how to send chunks of items to the middleware as messages. The slaves are standard listeners for whatever middleware is being used (for example, with JMS, they would be MesssageListener implementations), and their role is to process the chunks of items using a standard ItemWriter or ItemProcessor plus ItemWriter , through the ChunkProcessor interface. One of the advantages of using this pattern is that the reader, processor, and writer components are off-the-shelf (the same as would be used for a local execution of the step). The items are divided up dynamically and work is shared through the middleware, so that, if the listeners are all eager consumers, then load balancing is automatic.

The middleware has to be durable, with guaranteed delivery and a single consumer for each message. JMS is the obvious candidate, but other options (such as JavaSpaces) exist in the grid computing and shared memory product space.

Spring Batch also provides an SPI for partitioning a Step execution and executing it remotely. In this case, the remote participants are Step instances that could just as easily have been configured and used for local processing. The following image shows the pattern: 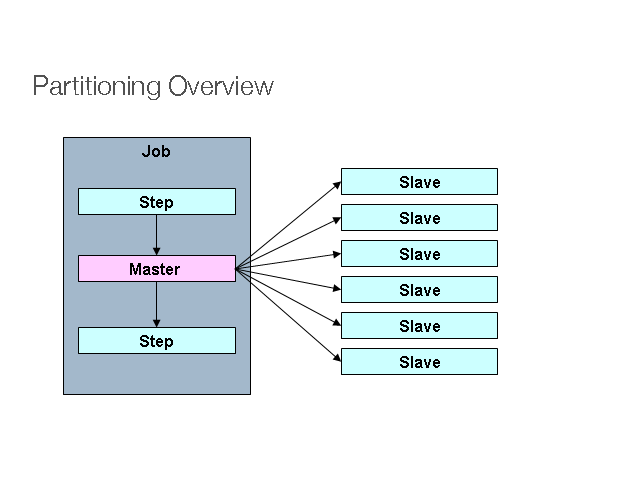 The Job runs on the left-hand side as a sequence of Step instances, and one of the Step instances is labeled as a master. The slaves in this picture are all identical instances of a Step , which could in fact take the place of the master, resulting in the same outcome for the Job . The slaves are typically going to be remote services but could also be local threads of execution. The messages sent by the master to the slaves in this pattern do not need to be durable or have guaranteed delivery. Spring Batch metadata in the JobRepository ensures that each slave is executed once and only once for each Job execution.

The SPI in Spring Batch consists of a special implementation of Step (called the PartitionStep ) and two strategy interfaces that need to be implemented for the specific environment. The strategy interfaces are PartitionHandler and StepExecutionSplitter , and their role is shown in the following sequence diagram: 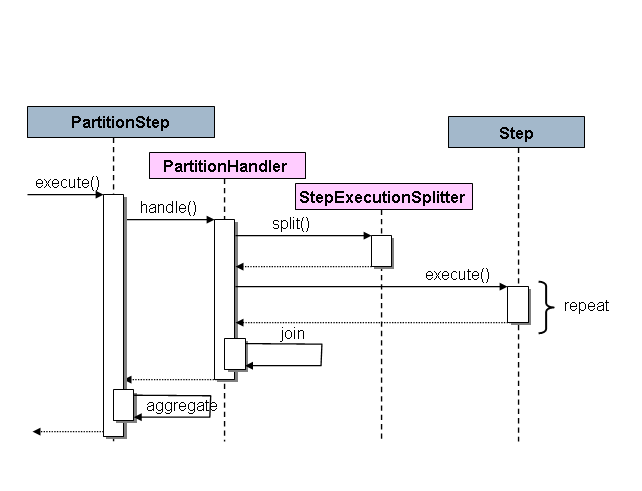 The Step on the right in this case is the "remote" slave, so, potentially, there are many objects and or processes playing this role, and the PartitionStep is shown driving the execution.

Similar to the multi-threaded step’s throttle-limit attribute, the grid-size attribute prevents the task executor from being saturated with requests from a single step.

There is a simple example that can be copied and extended in the unit test suite for Spring Batch Samples (see Partition*Job.xml configuration).

Spring Batch creates step executions for the partitions called "step1:partition0", and so on. Many people prefer to call the master step "step1:master" for consistency. You can use an alias for the step (by specifying the name attribute instead of the id attribute).

The PartitionHandler is the component that knows about the fabric of the remoting or grid environment. It is able to send StepExecution requests to the remote Step instances, wrapped in some fabric-specific format, like a DTO. It does not have to know how to split the input data or how to aggregate the result of multiple Step executions. Generally speaking, it probably also does not need to know about resilience or failover, since those are features of the fabric in many cases. In any case, Spring Batch always provides restartability independent of the fabric. A failed Job can always be restarted and only the failed Steps are re-executed.

The PartitionHandler interface can have specialized implementations for a variety of fabric types, including simple RMI remoting, EJB remoting, custom web service, JMS, Java Spaces, shared memory grids (like Terracotta or Coherence), and grid execution fabrics (like GridGain). Spring Batch does not contain implementations for any proprietary grid or remoting fabrics.

The TaskExecutorPartitionHandler is the default for a step configured with the XML namespace shown previously. It can also be configured explicitly, as shown in the following example:

The TaskExecutorPartitionHandler can be configured explicitly within java configuration, as shown in the following example:

The gridSize attribute determines the number of separate step executions to create, so it can be matched to the size of the thread pool in the TaskExecutor . Alternatively, it can be set to be larger than the number of threads available, which makes the blocks of work smaller.

The TaskExecutorPartitionHandler is useful for IO-intensive Step instances, such as copying large numbers of files or replicating filesystems into content management systems. It can also be used for remote execution by providing a Step implementation that is a proxy for a remote invocation (such as using Spring Remoting).

The Partitioner has a simpler responsibility: to generate execution contexts as input parameters for new step executions only (no need to worry about restarts). It has a single method, as shown in the following interface definition:

The return value from this method associates a unique name for each step execution (the String ) with input parameters in the form of an ExecutionContext . The names show up later in the Batch metadata as the step name in the partitioned StepExecutions . The ExecutionContext is just a bag of name-value pairs, so it might contain a range of primary keys, line numbers, or the location of an input file. The remote Step then normally binds to the context input using #{…} placeholders (late binding in step scope), as illustrated in the next section.

The names of the step executions (the keys in the Map returned by Partitioner ) need to be unique amongst the step executions of a Job but do not have any other specific requirements. The easiest way to do this (and to make the names meaningful for users) is to use a prefix+suffix naming convention, where the prefix is the name of the step that is being executed (which itself is unique in the Job ), and the suffix is just a counter. There is a SimplePartitioner in the framework that uses this convention.

It is very efficient for the steps that are executed by the PartitionHandler to have identical configuration and for their input parameters to be bound at runtime from the ExecutionContext . This is easy to do with the StepScope feature of Spring Batch (covered in more detail in the section on Late Binding). For example, if the Partitioner creates ExecutionContext instances with an attribute key called fileName , pointing to a different file (or directory) for each step invocation, the Partitioner output might resemble the content of the following table:

Then the file name can be bound to a step using late binding to the execution context, as shown in the following example: