Spring Cloud Reference
Back to index

Spring Cloud Stream provides a number of abstractions and primitives that simplify the writing of message-driven microservice applications. This section gives an overview of the following: 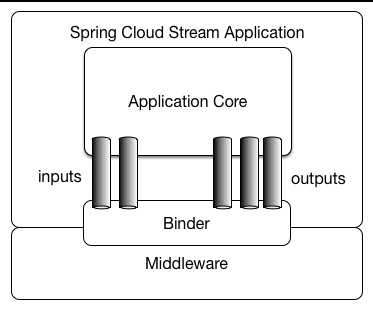 Spring Cloud Stream provides Binder implementations for Kafka and Rabbit MQ . Spring Cloud Stream also includes a TestSupportBinder , which leaves a channel unmodified so that tests can interact with channels directly and reliably assert on what is received. You can also use the extensible API to write your own Binder.

Spring Cloud Stream automatically detects and uses a binder found on the classpath. You can use different types of middleware with the same code. To do so, include a different binder at build time. For more complex use cases, you can also package multiple binders with your application and have it choose the binder( and even whether to use different binders for different channels) at runtime.

Communication between applications follows a publish-subscribe model, where data is broadcast through shared topics. This can be seen in the following figure, which shows a typical deployment for a set of interacting Spring Cloud Stream applications. 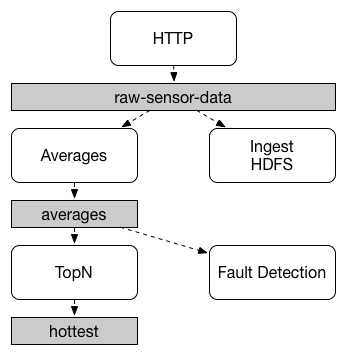 Data reported by sensors to an HTTP endpoint is sent to a common destination named raw-sensor-data . From the destination, it is independently processed by a microservice application that computes time-windowed averages and by another microservice application that ingests the raw data into HDFS (Hadoop Distributed File System). In order to process the data, both applications declare the topic as their input at runtime.

The publish-subscribe communication model reduces the complexity of both the producer and the consumer and lets new applications be added to the topology without disruption of the existing flow. For example, downstream from the average-calculating application, you can add an application that calculates the highest temperature values for display and monitoring. You can then add another application that interprets the same flow of averages for fault detection. Doing all communication through shared topics rather than point-to-point queues reduces coupling between microservices.

While the publish-subscribe model makes it easy to connect applications through shared topics, the ability to scale up by creating multiple instances of a given application is equally important. When doing so, different instances of an application are placed in a competing consumer relationship, where only one of the instances is expected to handle a given message. 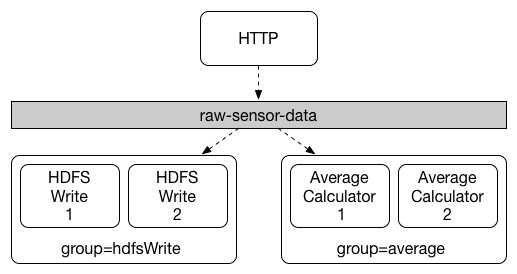 All groups that subscribe to a given destination receive a copy of published data, but only one member of each group receives a given message from that destination. By default, when a group is not specified, Spring Cloud Stream assigns the application to an anonymous and independent single-member consumer group that is in a publish-subscribe relationship with all other consumer groups.

Two types of consumer are supported:

Prior to version 2.0, only asynchronous consumers were supported. A message is delivered as soon as it is available and a thread is available to process it.

When you wish to control the rate at which messages are processed, you might want to use a synchronous consumer.

Spring Cloud Stream provides a common abstraction for implementing partitioned processing use cases in a uniform fashion. Partitioning can thus be used whether the broker itself is naturally partitioned (for example, Kafka) or not (for example, RabbitMQ). 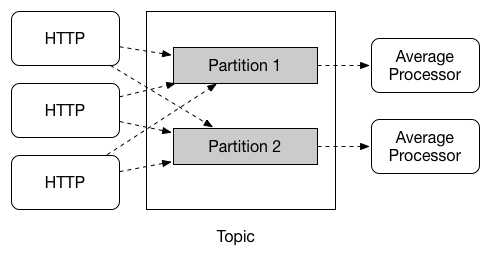 Partitioning is a critical concept in stateful processing, where it is critical (for either performance or consistency reasons) to ensure that all related data is processed together. For example, in the time-windowed average calculation example, it is important that all measurements from any given sensor are processed by the same application instance.

To set up a partitioned processing scenario, you must configure both the data-producing and the data-consuming ends.